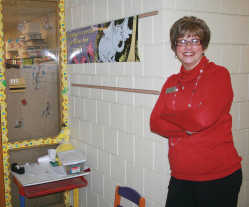 Stacey Baugh, Cloverdale Elementary School principal, stands outside the room where she attended classes as a sixth-grader.
Order this photo

CLOVERDALE -- When she was a student at Cloverdale Elementary School, Stacey Baugh never wanted to end up in the principal's office.

Now she's there every day -- sitting behind the desk.

Baugh began attending Cloverdale Elementary in 1976 as a fifth-grader. She graduated from Cloverdale High School in 1984.

Baugh is not the only Cloverdale administrator with roots in the schools system -- Cloverdale Elementary assistant principal Dianna Whitlock and Cloverdale High School principal Sonny Stoltz both attended the schools they now work in, and both are 1985 CHS graduates.

Baugh was a teacher at South Putnam Community Schools for nine years before coming to Cloverdale High as an assistant principal in 2006. She took the helm at CES in 2010.

Baugh began thinking about a career in education when she was in the seventh grade.

"I had a great English teacher that year," Baugh said. "All through high school, English was my main interest. Teaching became my desire, and I always really thought I'd come back to Cloverdale and teach."

When she did finally make it back to Cloverdale schools, it was in an administrative role.

"When I went to the high school, there were about six teachers there who had been there when I was a student," Baugh said. "It was interesting to become their leader."

Stoltz also credited a teacher with getting him interested in education.

"When I was in sixth grade, I had a teacher who had a profound affect on me," he said. "He wasn't just a teacher ... he was also a coach and helped with maintenance at the school. He was so full of life and he loved kids. I really looked up to him."

That teacher, Stoltz said, taught social studies, and he thought that would be what he would teach as well.

But Stoltz's career, which began in Cloverdale, took a different direction.

"I actually ended up teaching Title I for four years, then third grade for 10 years," he said.

Whitlock also always had teaching in Cloverdale in the back of her mind.

"I was thinking about it even when I was going through college getting me degree," she said.

Whitlock moved from teaching at Cloverdale schools into administration four years ago.

"I'd say it's been very positive," she said. "What worried me was that I thought I'd miss the kids ... but I wanted to have more of an impact on curriculum."

Whitlock found her former teachers very receptive when she came into the school system as an employee, and later when she moved into administration.

"They were so wonderful and supportive," she said.

Whitlock has made it a priority to get out of her office and maintain contact with the students.

"I feel really blessed that I can get out into the classrooms," she said. "I greet the kids in the mornings. I love seeing them come in off the bus."

Several students at CES are the children of people Baugh went to grade school with.

"It's amazing," she said. "I think I may even have some grandchildren here of people I went to school with."

Baugh feels having that connection with many of her students has helped her become a more effective administrator.

"I'm passionate about education and children in general," she said. "But knowing the background and history of so many of my students has worked out quite well. Being here has been nothing but positive for me."

Baugh said she sees the school building itself in a whole new way now.

"When I was a student, the office I'm in now was half the size," she said. "It's amazing, the changes I've seen and the things that have evolved in this small corporation."

Being in the same classrooms she studied in brings back floods of memories.

"I go in and observe, and I wonder if I was ever that squirrelly," she said with a chuckle.

Stoltz said his history in the school has been beneficial for him as far as understanding his students.

"One of the things having been here as a students gives me is the opportunity to look at things they way they were in the 80s and the way they are now," he said. "Times change, people change, but the things the students really need are still the same."

Baugh said she had a good relationship with the teachers at her school, and she believes her history with the corporation helps in that aspect.

"I have pride in this school, and I think people see that," she said. "It makes it easier for me sometimes to sell a program or mandate. The teachers may not always like what I have to say or what the state is throwing at them, but they know I want us to improve and succeed."

That familiarity can come with pitfalls as well.

"People know me, so they tend to expect certain things for me," Stoltz said. "That's something I've always had to be very careful about."

Baugh, Whitlock and Stoltz all have children who are currently attending or have graduated from Cloverdale schools.

Stoltz said having his children attend Cloverdale was important to him.

Whitlock, who attended Cloverdale schools from second grade on, said she has never regretted sending her three children to the same schools she attended.

"They've had a good experience here," she said.

Stoltz said overall, he loves being in the school where he grew up.

"It's an awesome feeling," he said. "There's a sense of loyalty that goes both ways. I've taught, and at one point I coached three sports, so I spent a lot of time away from my family so I could give back.

"On the other side, the loyalty the school corporation has to me has given me so many opportunities. I don't dream of myself going anywhere else."