Raab goes from student to teacher 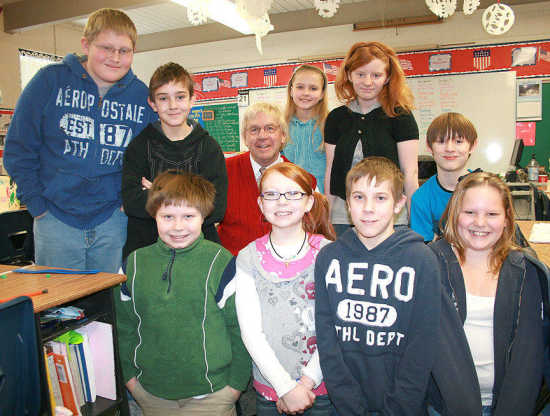 This story is part of a series about Putnam County educators who have returned to work at the schools they once attended as students.

REELSVILLE -- Jeff Raab first walked into Reelsville Elementary School as a first-grader in 1954.

And over the past 40 years, he's spent thousands more days there.

Raab went to grade school, elementary school and high school in Reelsville, graduating in 1967. He went to Indiana State University for his college undergraduate studies, and went on to earn his master's degree at DePauw.

When his college years were complete, he returned to Reelsville as a teacher -- he now teaches fifth grade there, and has been in the same room for four decades.

"I've basically spent all but 10 years of my life in this building," he said with a chuckle. "I had history and social studies classes right here ... I guess I even had German in this very room."

Raab said he remembered wanting to be a teacher from the time he was "very tiny."

"I had other aspirations throughout my life, of course, but I was always led back to this," he said. "I feel like I've lived my dream."

Raab said the reason he has stayed in teaching for so long is that he truly enjoys interacting with the students -- and it seems many of them return the sentiment.

"He loves the kids and the kids love him," said Rita Latham, Reelsville Elementary secretary. "If you ask kids who've been through here who their favorite teacher was ... or who their most memorable teacher was ... a lot of them are going to say Mr. Raab. He is so great at helping them through transitions. He knows just when to hold their hands and just when to let them go."

Raab said he doesn't think he would want to teach anywhere but in the town where he grew up.

"There really is an advantage to it," he said. "People know me, and I think that's something that makes me want to make sure I'm doing my best. It helps that I know my students' parents."

Raab said although he understands the need for standardized testing, he feels a bit too much emphasis might be put on it these days.

"I love for the kids to be creative, and I think standardized tests have become such a big part of education that we've gotten away from letting them do that," he said. "When our test scores are low, I take that personally ... not just for the teachers, but for the parents and students, because I love this community and have been a part of it for so long."

Inevitably, Raab gets students in his class whose parents he taught years ago.

"I have a big group of them this year," he said with a smile. "It's fun to see the parents in their children. I notice when they have a lot of the same mannerisms."

Raab makes it a point to eat lunch with his students regularly.

"It's a different atmosphere," he said. "You really get to know them in a different light."

Raab has a principal's license, but doesn't think the time will ever come when he will use it.

He also said no to his first job offer, which was from the American School in Kuwait.

"It's funny," Raab said. "I always planned on seeing the world, but I've stayed right here. But I have no regrets. I would do it all over again."

Raab grew up on his family's farm in Reelsville, where his parents still reside. Raab now lives in Indianapolis.

"I felt like I wanted to do something just a little different," he said. "I still work where I grew up, but I wanted some different experiences. I don't mind the drive ... it gives me time to prepare on the way in and time to reflect on the way home."

Raab, who will be 63 in July, said he considers one of the perks of his job being surrounded by children.

"It helps keep me well-grounded," he said. "I'd also like to think it keeps me young."

In his experience, Raab has found most of his students to be well mannered and pleasant.

"What they really help me with a lot is the electronic equipment," he said. "I don't know if it's because I'm old or what, but they're so helpful. I really feel like they want to do things for me. They're very kind."

The advent of social networking has made it possible for Raab to keep up with his former students.

"Most of my Facebook friends are former students," he said. "It's been really fun for me to see where they've ended up and to be able to keep up with what they're doing."

Raab said in all the years he's been in the classroom, his basic philosophy on education hasn't changed much.

"The teachers I remember the most are the ones who took a real interest in me," he added. "That's the kind of teacher I've always strived to be."