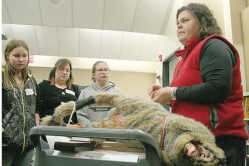 Students from Cloverdale Middle School gather around Jerry the dog as Area 30 Veterinary Tech teacher Kami Hyde explains how the dog is used for teaching.

GREENCASTLE -- A stuffed animal, more realistic and stiffer than most, lays on a table with teens gathered around, hearing the beat of its heart.

It's not some sort of new robotic nightmare but a learning tool that allows students to get a hands-on sensation to match with symptoms.

Eighth grade students from Cloverdale Middle School were at Area 30 Career Center Monday to tour the building, interacting with Area 30 students and educators in areas the CMS students said they had an interest in.

Kami Hyde, the school's veterinary technician and landscape teacher showed middle schoolers around Jerry, the stuffed dog that's used as a training device. Students can hear the sound of a dog's heart beating on its chest, the sound of different ailments, feel simulated broken bones and even draw blood.

"Do you feel that little ridge there?" Hyde said. "That's the vein.

"When we do training with needles, I've learned to mix the liquid we use with water," she said. "It's a little too close to actual blood, and I would have my hands dyed red for a few weeks."

On the other side of town, students that are a few years older than the eighth graders were getting hands-on training of a different sort.

At the Greencastle Police Department later in the day high schoolers who are a part of Charles Inman's law enforcement class at Area 30 were using a simulator that is a step or two away from a video game, but also an education tool.

Kayla Mahoy stands in front of a large projection screen, wearing a belt with what appears to be a firearm with a tube attached to it, as well as other tools attached to tubes. The tubes lead to a large projector, which is showing images of a car chase that turns into a foot chase.

As the people on screen exit their car, Mahoy fires her gun at the exiting driver and passenger.

"Why were you shooting at them?" Inman asked.

"They shot at my car," said Mahoy, a junior at North Putnam.

Inman then pointed out that even though the simulated perpetrator fired at her car, when Mahoy fired she wasn't posing an immediate threat.

Another simulation involves a child holding a shotgun at another officer.

"It's hard because she's a child, but she's still holding a gun firing that weapon," Inman said.

Mahoy was using a Firearm Training Simulator, which combines a variety of simulated weapons and aiming options with choices about how to approach a problem. Students with Inman's law enforcement class were able to use the device as an optional training tool outside of class.

"It's basically a decision making tool on use of force," Inman said. "It works to build communication skills where you're working through a dilemma. If the officer is reacting well to the situation it can de-escalate or it can escalate depending on the situation."

The simulator also allows a person to play back scenarios they've gone through.

"There are times when you may have to go to (using a firearm), but there are other tools there as well, like better communication skills," Inman said.

He said that less lethal options are also a part of the simulator, such as pepper spray, tasers and even a prompt for a baton.

"Then you do have your worst case scenario, which is deadly force and they train you for that as well," he said.

The simulator has firearms hooked up to a CO2 dispenser so that the guns can have actual recoil to go with a loud bang when the guns fire.

"It's designed by the manufacturer to be as realistic as possible without being live fire... Pretty much the closest thing you can get to without doing that," Inman said.

Inman said that representatives from the Greencastle Police Department, Putnam County Sherriff's Department and DePauw University Public Safety all serve on the advisory board for the law enforcement program, which helps make the time with the simulator a reality.

Heather Elkins is the guidance counselor at Area 30. She said 8th graders tour the facility because they are preparing to do their four-year plans for high school. The hope for her is that the eight-graders who are given tours will eventually become 11th-graders taking classes through the center.

"We like them to know what all of their options are so that they can figure Area 30 into those options and plan accordingly if they think it's something they want to do.

Elkins said that part of the reason for the tours is to draw attention to the school.

"Quite frankly we're here because we have to have a certain number of students. It's a good marketing tool," she said. "We want them to just get a little snippet, a taste of what it's like in that class."

Elkins said that one of their goals is to make sure the students who tour through the facility are able to take something home, such as some play-dough for the elementary students or a hair net for culinary students.

Elkins said that she viewed the eighth grade visitations as the first of a two-step process.

"The follow up to this, then is in 10th grade. I come back and give a presentation to all the schools. At that time the students can schedule to come and do a full day shadow where they visit the program they think they want to take or sometimes they'll split programs," She said. "They remember visiting in eighth grade."