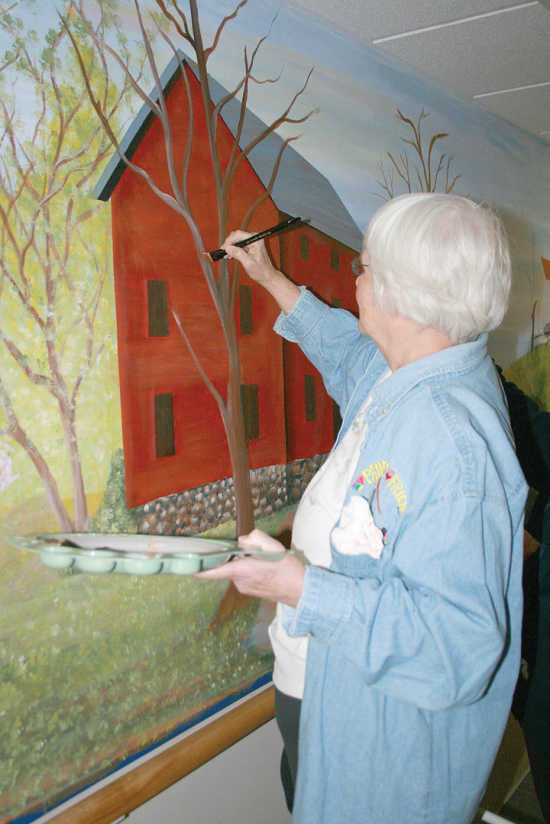 Pat Smith of Avon, a member of the Indy Decorative Artists, paints a tree in the spring section of the mural at Asbury Towers that will depict the four seasons.

GREENCASTLE -- The halls in the basement of Asbury Towers are slowly coming to life -- thanks to the talents of members of the Indy Decorative Artists.

Several women who belong to the group, which is a chapter of the international organization The Society of Decorative Painters, have been working for the past couple of weeks on a mural at the nursing facility.

The mural, which will depict the changing seasons, will be finished in another two or three weeks. The project was spearheaded by Donna Harcourt of Fillmore, who teaches art classes at Asbury Towers and is an active member of the Indy Decorative Artists. 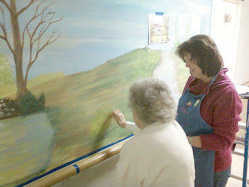 "I work with residents on the assisted living and clinical sides," Harcourt said. "We do all kinds of crafts ... watercolors, acrylics ... yesterday we did Valentines. We do lots of paper crafting."

Harcourt said her interaction with the residents at Asbury Towers made her want to do a major project for their enjoyment.

"They give me back 10 times more than I give them," she said with a smile. "There's nothing more precious than hearing them tell their stories. It's like you get a history lesson. It just warms my heart to watch them."

Harcourt has been working two or three days a week on the mural, and the other volunteers from the group come in once a week.

"It's not only for the residents, it's for everyone who comes through here," said Harcourt. "I hope it brightens someone's day. I want people to enjoy decorative painting, because I enjoy it so much. I want to help bring joy and memories into other people's lives, even if it's only for a moment."

Harcourt invited some of the residents to come down to the basement and do some of the small fill-in work on the mural.

"One of the residents said, 'Now every time I go by, I'll know I did that,'" Harcourt said.

The group chose to do the four seasons, Harcourt said, "because it would never get old."

The mural progresses down a long stretch of the basement wall. It begins with spring, then moves into summer, autumn and finally winter. While the spring and summer sections are getting some color now, the fall and winter sections are still mostly pencil sketches and outlines.

"Every painting goes through an ugly stage, and that's where this one is now," Harcourt said with a chuckle. "But next week, it will look really good."

Charlene Baker of Indianapolis said the Asbury Towers project is her first mural.

"I really wanted to get the experience," she said. "But then the more you're with the girls in the club, the more you get to know them. It's fun to have the time to talk and learn about their lives."

Baker said she hopes the residents will enjoy the mural.

"My mom and my in-laws were in a nursing home, and I think something like this would have given them pleasure," Baker said.

Baker said she also enjoys the attention she is able to give projects she does away from home.

"At home, you don't have uninterrupted time like this," she said. "It's almost like a ladies' day out."

Pat Smith of Avon has been with the Indy Decorative Artists for nearly 15 years.

"I like to do the community service things," she said. "I was glad to hear we were do something (at Asbury Towers), because my son's mother-in-law is here."

Smith said she feels good about sharing her art with the residents at Asbury Towers.

"I hope it makes them happy and becomes a light in their lives," she said.