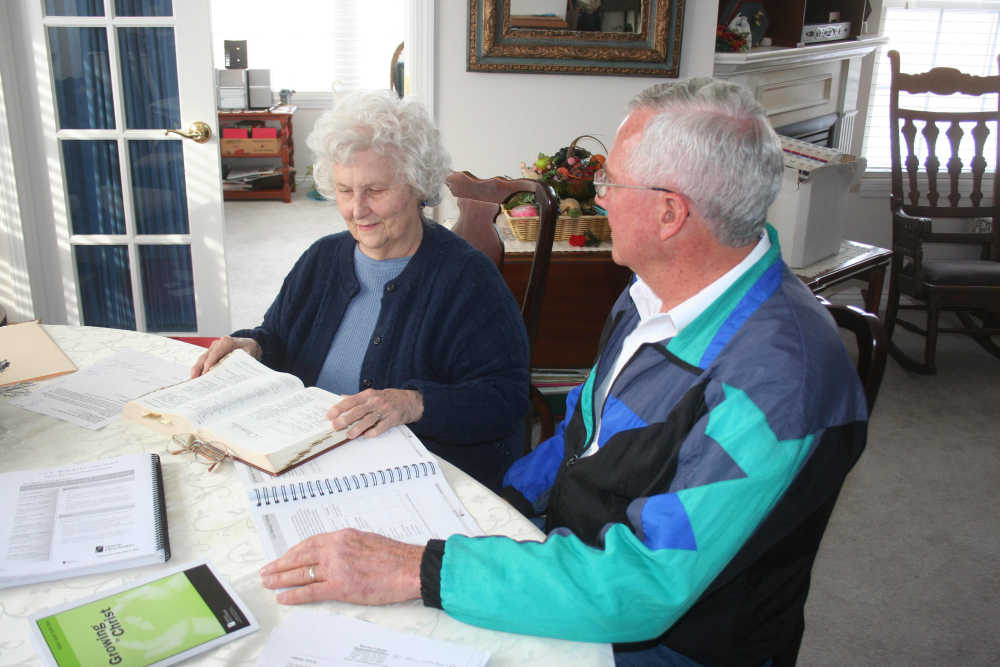 When the jail cell doors close for the first time on many new inmates, it may seem like there is no escape.

The members of Prison Fellowship try to help them find hope.

Marian Ulrich works on next week's lesson at her kitchen table, surrounded by pictures and drawings of Christian symbols, works, art and Bible verses. Her own Bible is opened to the beginning of Chronicles.

With the Prison Fellowship, she has been going into Putnamville Correctional Facility every Wednesday night since 1983.

"Once they're in, we need to try and help them realize they need to ask for forgiveness," Ulrich said.

Prison Fellowship is a national program founded in 1976 by former Nixon aide Charles Colson. The mission of the program is to help inmates change their attitudes and transform their lives through the power of God.

If the inmates are able to leave prison, the messages in the lessons and faith to God will help keep them from returning again as an inmate, Ulrich said.

"It's about the Bible and how to live according to the Bible," Ulrich said.

Ulrich and her group organized in 1983 thanks to Stephen Pierson, who no longer participates. The group uses lesson plans from the fellowship to help teach prison inmates about forgiveness, acceptance and God, with the eventual goal being reformation and a new way of life.

Whether inmates leave prison or not, Ulrich said they should still learn how to better themselves as individuals and prevent themselves from making the mistakes that could lead them back to prison.

"It's almost easier to end up in prison than to fight what you want to fight," Ulrich said.

Though not a traditional mass or church service, the volunteer group must receive training from the fellowship to become full-time volunteers. What was once a large group of more than 25 people has dwindled over time to a group or seven or eight.

Coupled with changes in prison rules, reaching the prisoners has become more difficult than in the past.

"They don't always like to sit next to each other and it's hard to get them in small groups,' said Jim Steele, group member since 1984.

At 6 p.m., group volunteers get to the Putnamville Correctional Facility.

Since many of the volunteers are older, they tend to carpool. Also, the group's last assistant chaplain left several months ago, meaning that the group cannot gain access to the chapel without Joe Asher, who volunteers to oversee the group and hold the keys to the room.

Becoming an assistant chaplain requires extra group training that the current members do not want to take on.

According to the dormitory style of the facility, different groups are finishing dinner at different times. As inmates finish and are sent to the chapel between 6:30 and 6:45 p.m., the group organizes and prepares for the evening's theme and lesson.

Each session begins with an "icebreaker" event. This part is very informal, as the prisoners and volunteers share stories and experiences and try to get to know one another, as well as introduce new members.

"The idea is to help relax and help let them know we are about them," Ulrich said. "It takes some time to do that."

After the icebreaker, the group joins together for a musical prayer, followed by the lesson for the week. At the end of the lesson, they give a summary of the main themes and try to ask the inmates if they have any questions.

The group used to be able to perform the services in small groups, breaking the prisoners up into 30-40 person groups with a few volunteers supervising each group.

But as more and more inmates try to enter the service and fewer volunteers show up, the small groups have been abandoned for now. However, these group times were the best for connecting with the inmates and better answering their questions.

"Some can't read or write, but we don't know because we're in this big group," Ulrich said. "I want to get to the bottom of (why they return to prison). We need volunteers to help us."

Becoming a part of Prison Fellowship is obviously not for everyone. But those that can put the time and effort required can find a rewarding experience.

"It has to be the right person; it has to be your calling," Steele said.

Going to the services can even change a person's life.

Eenie Warfield, a former member of the group who left in late 2010 for health reasons, had always been a religious person, claiming she was saved when she was 3 years old.

But she was initially apprehensive about joining the fellowship in the prison.

Twenty-seven years later, she is glad she did.

"I probably wouldn't have involved myself in other people's problems if I didn't go into prison," Warfield said. "It's really changed me in a lot of ways. I feel guilty for not going and doing what I do well (but) I didn't feel that it was the right thing for me to continue when I couldn't do it every week."

She said she has always tried to help inmates realize that, though not everyone is guilty of the crimes they have committed, they can avoid returning to prison and lead a better life by listening to the Lord.

"People ask me 'Oh Eenie, why has God done this to me,' and I tell them 'God didn't do this to you. You chose to listen to your friends or chose to take those drugs because you didn't think you would get caught,'" Warfield said. "God's spirit talks to us all the time; it's our choice to listen."

There are also other ways to help prisoners improve their lives during their sentence. Pastor Dave Neeley of Cornerstone Baptist Church attended a seminar in Putnamville Correctional Facility last year. During the seminar, the prisoners led in worship and they discussed the important of faith.

"Faith is important whether you're in prison or not," Neeley said. "It's something that they're able to lean on."

Volunteers can also help with the Prison Fellowship's Angel Tree program, which builds relationships with children and families that have a parent in prison. First Baptist Church is a Greencastle church involved with this program.

Whether a person chooses to help in the prison, there are other ways to help people and spread the word of God if they choose to do so.