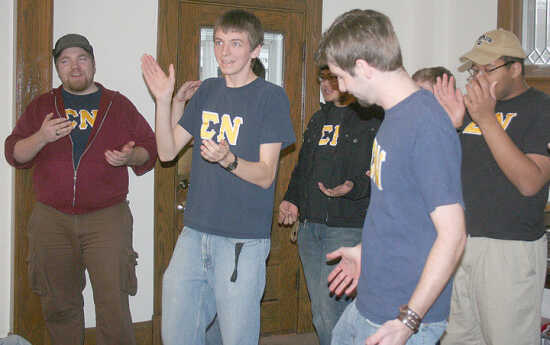 The men of Sigma Nu begin their skit explaining the benefits of joining the fraternity. The group met with 10 different groups of pledges as the groups traveled to different Greek chapters for recruitment.
Order this photo

GREENCASTLE -- The Sigma Nu fraternity founded their DePauw University Chapter in 1890. Their motto is "Love, Truth and Honor."

They have a new house that they are using for the first time for recruitment and they are on their second group of prospective new members.

But for those rushing on Saturday, these facts are either unknown or unimportant. Freshmen like Alex Sroha toured every Greek chapter on campus during the first day of recruitment as they traveled in groups to each house, herded by the Rho Gammas, Recruitment counselors.

For Sroha, joining a fraternity means an active social life, easy access to philanthropic events and becoming a part of campus life.

"The school in general is very Greek and it's a big part of the social life," Sroha said. "The philanthropy stuff they do in the community is another positive."

Fraternity members Brian Allman and Mike Padilla kept the group of about 20 possible future members busy until the rest of the fraternity marched out the door single file, making a line of people from the door to the sidewalk. Each group member walked through the line greeted and welcomed inside the Sigma Nu home by every fraternity member in the line.

After the group grabbed some quick snacks, they quickly filled up all the couches in the house's common room and were treated to an informative, and at times ridiculous, skit involving the different fraternity members. Commander and President Austin Bonta began the skit with an introduction to the house and what it means to be part of the only honor fraternity in the nation.

"Everybody here knows each other in a way that's personal," Bonta said. "We are one of the only fraternities that knows its creed by heart."

Members chanted their creed, explained their social calendar -- confirming that Pluto is not a planet and the Utah Jazz are not very good this year in the process -- and pointing out that the fraternity is anti-hazing.

"We don't have signatures. We don't have house tours with freshmen. We don't even call you guys pledges," Allman said. "You get respect. The idea is we want you to have the best college experience possible.

"From here, until 110 years from now, we will always treat you with respect," Allman added.

The purpose of the program is to develop the members of the fraternity into leaders for the future, as well as help them build connections and network with professionals in the field. The program enters a different phase each year, and participating in the program is not required.

"It's about getting you involved in the community and on campus," Allman said.

After the skit the members informally met with the fraternity members and got a tour of the two-story building.

Bonta said he does not expect every member to want to live in the house; it isn't nearly big enough for that. But the house is expected to be a headquarters for fraternity members, a place to go where they can get help with homework, get involved in fraternity activities or just socialize.

People interested in joining the fraternity attended the second round of activities without their group last Sunday. The third round takes place on Saturday, with the final bids and new members accepted on Friday night.

Bonta said he is looking forward to receiving the new members, likening the experience of recruitment and rush to the first three dates with a girl.

"The first round is trying to get to know each other, the second date gets more intimate, and by the third date, you try to make it Facebook official," Bonta said.