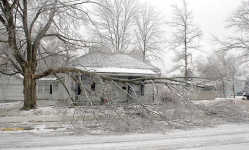 Downed trees, such as this one on Crown Street in Greencastle, have been the cause of several local power outages. Duke Energy reported 2,012 outages in Putnam County as of 10 a.m. Wednesday morning. Duke area manager Steve Bahr said crews have much to do, not only in Putnam County, but across the state.
Order this photo

GREENCASTLE -- A Putnam County Sheriff's Department deputy was injured Tuesday night while assisting at the scene of an automobile accident on I-70.

A news release from Indiana State Police Putnamville Post Sgt. Joe Watts said Deputy Jon Chadd was in his police vehicle just west of the 43 mile marker at about 10:15 p.m. Tuesday, not moving and with his emergency lights activated, when Chadd's vehicle was struck in the rear by a tractor-trailer combination.

A spokesperson for Hendricks Regional said Chadd was not listed in the patient directory.

The crash in which Chadd was injured, which is still under investigation, was one of four slide-offs and two crashes reported on I-70 in Putnam County overnight Tuesday and into Wednesday morning.

As of late Wednesday morning, all U.S. and state roadways in the Putnamville District -- which includes Putnam, Parke, Vermillion, Vigo, Clay and Sullivan counties -- were open, the release said.

"I-70 from the Illinois state line to the Putnam-Hendricks county line is operating normal with no delays," Watts said. "Roadway surfaces are ice- and snow-covered. Travel is discouraged unless it is an emergency. Power outages and fallen trees over power lines and onto roadways continue to cause problems within the district."

"Strong winds and decreasing temperatures can be a deadly combination should you become stranded along the roadway," he said. "If travel is necessary, make sure your vehicle has a full tank of fuel and is in good mechanical condition. In your vehicle, you should have a fully charged cell phone, high-energy food, blankets, matches, candles, and extra clothing. Let family members know of your expected travel route."

Watts also said motorists should "slow down and use extra caution when approaching emergency vehicles."

Watts said residents should not call law enforcement dispatch centers for road and weather information. Instead, call toll free (800) 261-7623 or visit www.trafficwise.in.gov for up to date information.

The county returned to a level 2 travel emergency Wednesday afternoon. Only essential travel is recommended.

The American Red Cross has established an emergency shelter at South Putnam High School. Beverly Ross, who was manning the shelter Wednesday morning, reported the shelter had housed a couple of truck drivers who stopped in for a break and another person whose house was without power.

"We're still available, so if someone needs some help or temporary shelter, it's available," Ross said.

The shelter provides water, coffee, snacks, cots and restroom access to those needing a warm place to stay. Residents seeking shelter should bring their own clothing, toiletries, medicine and any special dietary needs.

Duke area manager Steve Bahr said crews have much to do, not only in Putnam County, but across the state.

"There's a lot of work to do," Bahr said. "In the state itself, we've got about 50,000 customers without power. The storm was very widespread."

The hardest hit area was the Terre Haute area, but Bloomington was also hit hard on Tuesday evening. As of 10:03 a.m., Duke had 11 different counties in Indiana with more than 1,000 outages, including Putnam, Clay and Vigo.

Bahr said not only are Indiana crews responding to the need, but so are crews called in from the Carolinas.

"That's one of the advantages of being Duke Energy that we can pull resources from outside the area," he said.

Additionally, Duke has outside contractors and tree crews working throughout the state.

"We appreciate customers' patience as we work through this. We emphasize safety for the general public by staying away from downed power lines and power lines in general," Bahr said. "At this time in the storm process, we don't have an estimate of restoration. We are still completing the assessment phase of seeing where we are at and what type of damage we have."