A magic family for three generations 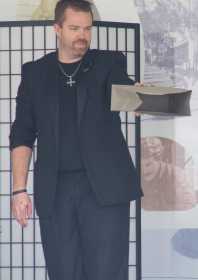 C.R. Ryan Demler performs one of his magic tricks. Demler's act involves his six-year-old son, and Demler himself is a third-generation magician.

GREENCASTLE --This Thursday, the Putnam County Public Library will be host to magic -- not the magic of reading and literacy but the stage magic of C. R. Ryan Demler, at 4 p.m.

"I'm actually a third generation magician," Demler said. "My grandfather did a little bit of magic, as did my father. I'm really the one who took it, ran with it and made it a career. Now my son, the fourth generation in the Demler household is performing with me."

Demler said the show he performs with his son has its own, personal narrative.

"The show I developed with my son in it is kind of my life with magic," Demler said. "It's kind of a look back on how I got started and some of the tricks I used to perform. As I progressed over the years, and got to the more dangerous and difficult tricks.

"Then my son comes out and performs some of his magic tricks," Demler said. "He takes the magic oath and is brought into the bretheren of magic."

Demler said his son first became interested in magic a little more than a year ago. After getting called on stage for one part of his father's act, he began to show more interest in magic.

"He really loves it. I never had to push it -- he wanted to learn magic," he said.

Demler said the storytelling involved in his act came with time -- when he was younger, speaking didn't come naturally.

Demler has been doing stage magic for 18 years.

"I actually got a magic kit when I was 10 years old for my birthday," he said. "I was more of a shy kid growing up. I had two best friends that lived down the street and that was about it. A lot of times I'd just kind of get home and start practicing."

Demler said when he turned 14 his parents found an advertisement for a professional magician's equipment for sale.

"They bought it for me," Demler said "That really gave me a push into magic. One box had books on magic, another box had videos another box was filled with props. It really kind of drove me to want to learn more and pursue this, to try and find work."

Demler said he got his first performing gig after that, at Greek Tony's in Carmel.

He said that his performing name, C.R. Ryan comes from an old nickname.

"My full name is Charles Ryan Demler and when I played baseball it was kind of a nickname. I went by C.R," Demler said. "I've always gone by Ryan (as a name).When we were trying to think of a name it just kind of fit -- C.R. Ryan.