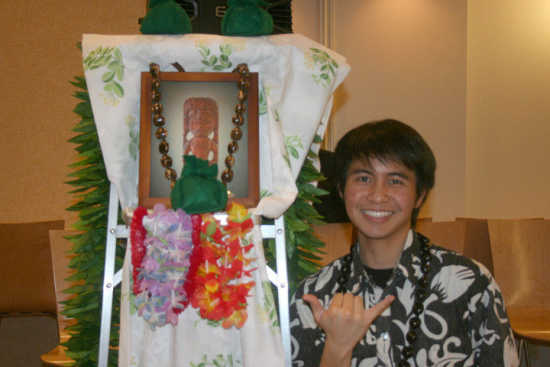 Jordan Ragasa, president of the Hawaii Club, stands next to the altar to Lono, Hawaiian god of peace. The club celebrated the Hawaiian new year celebration during the Super Bowl and also played several traditional Hawaiian games.
Order this photo

GREENCASTLE -- Many football fans likely spent the Super Bowl glued to their televisions to watch every play and commercial. The Hawaii Club at DePauw University was able to watch the game and also play a few rounds of nou pohaku, a traditional Hawaiian game similar to a boulder toss but traditionally involving spears.

"We couldn't find the spears," said Jordan Ragasa, president of the Hawaii Club.

The Hawaii Club, along with the Independent Council, held the Makahiki celebration in the Memorial Student Union Ballroom during the big game. Makahiki is the Hawaiian new year's festival, Ragasa said. It is often considered the Hawaiian equivalent of Thanksgiving or Christmas, and is celebrated in three phases.

During this time, which lasts several months, the different Hawaiian tribes would put down their arms and forget grudges in order to celebrate and compete in a "Hawaiian Olympics" of sorts. Hawaiian warriors would compete in several different games such as the nou pohaku, the 'Ula maika, which is similar to bowling, and the uma, which is an arm wrestling competition.

The group was split into a red and blue team in order to compete in the different events. The club also had an altar dedicated to Lono, the Hawaiian god of peace, fertility and music, whom the holiday is dedicated to.

"This is Recruitment week, so we wanted to provide an alternative," Oluka said.