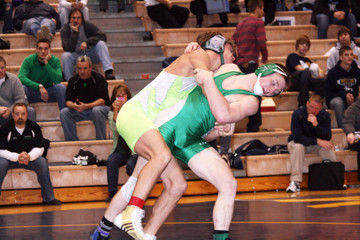 MOORESVILLE -- With snow still flying outside and road making everyone take a little extra time to get there, 15 Putnam County wrestlers took to the mats at the Mooresville Regional in hopes of making it to the semi-state in Evansville.

Cloverdale's Helterbrand was the big winner Saturday as he was crowned the individual champion at the 145-weight class. He easily defeated Monrovia's Dalton Clements in the final to win the title.

"Helterbrand winning in the finals -- he wrestled Clements and I tell you what, he looks better every time he wrestles," CHS head coach Steve Livingston said. "A kid like Dalton Clements -- he's similar to Donnie, he's explosive, he can throw you to your back and Donnie just went in there and took control of the match and set the pace. When we look at total domination I guess of a match, that was pretty much it."

Third place finishers Hall and Boldman will also be advancing and Livingston said he saw some nice things from them.

"Jeremy Boldman, he lost a squeaker that put him in for third and fourth and he came through and got third place," he said. "A similar situation as Ben Davis he lost and mentally couldn't recover and came back and lost the next round and we were hoping that didn't happen today. It just shows maturity as a wrestler -- he lost, came back the next round and beat Macri who's a tough wrestler.

"Matt Hall, that's the kid who beat him in the finals last weekend. We told him you lost that match because you didn't do any offense. You do some offensive maneuvers you're going to win. He throws the kid to his back -- he just did some offense, capitalized on it and then he wrestled his style and won the match," Livingston said.

At 112, Shipp was able to advance to the semi-state after placing fourth, falling to Avon's Nick Etienne in the third place match. Livingston acknowledged Shipp's road at semi-state could be a rough one.

"Shipp, getting fourth, he's going to have the toughest road next Saturday, but our team as a whole, the guys we had wrestle, had a hard time finishing scoring maneuvers. We're letting guys up with five seconds left -- we have to clean that up before next weekend," he said.

"Jesse had a good day -- he still wrestled a little flat. We have some things to work on with him. (If he) gets two wins next week and we're looking at state," Greencastle head coach Matt McComish said.

McComish also said going a week without practice had an impact on his team's performance Saturday. He said he didn't know if his team would have won more matches, but the weather was a factor.

"It was a good day for Jesse, but we came out flat today and I can't say anything else but. The weather didn't cooperate with us this week and we tried to get a practice in this morning, but four days away hurt us a little bit. I don't know if we would have won any more matches, but we would have wrestled better I think," McComish said.

North Putnam's Ruble fell to Greenwood's Bailey Schober in the third place match to place fourth, but in advancing he's doing something no other North Putnam wrestler has done.

"He's going to semi-state two years in a row. The first time anyone at North Putnam has done that. He didn't wrestle extremely well like I'd hoped. Then again no practice last week and it showed," North Putnam head coach Kenny Kerns said.

Even with the struggles, Kerns said he's not counting Ruble out.

"We're not completely out of it," Kerns said. "He's a good enough wrestler he can still go on. But it's just aggravating because he should have done better here, but he knows it, so I'm not going to dwell on it. He's a good kid. It's hard to get mad at him. I got upset, but I know he's harder on himself that I could be on him."

South Putnam sent two wrestlers, Jesse Gardner and Tanner Thompson, but the duo failed to win in their first-round matches and had their day ended prematurely. South Putnam head coach Josh Hendrickson was happy with how his wrestlers performed on the day.

"I thought they wrestled we considering we only got to practice one time all week," he said. "They both would have had to make an upset to advance, but it was possible. It's definitely not a negative to end the season that way. I thought they both did well."

Hendrickson said regional was a learning experience and his wrestlers are already talking about improving for next season.

"It's a good learning experience. Overall, it was a good season for us. They picked up a lot of experience and we got better. The good thing is the kids are excited about wrestling and they want to make themselves better in the off-season."

This will be the first time since 1990 when Cloverdale will be sending four wrestlers to semi-state. Livingston said the semi-state mentality is much the same as the regional -- live to fight another day. He said the focus will be on winning two matches and punching their ticket to the state finals in Indianapolis.

The Evansville Semi-State will begin at 9 a.m.