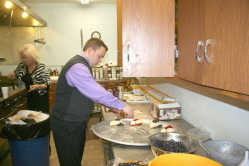 GREENCASTLE -- It's the second round of Recruitment at DePauw University on Friday night, and ice and snow have covered the sidewalk leading up to Phi Gamma Delta, known more by their nickname of Fiji. The fraternity has an open fire pit just out the doorway of their house and members have lined up in their Sunday best along the sidewalk to welcome a second group of possible future members.

Members are welcomed with a warm house, images of past Fiji members, slices of cheesecake, coffee and a greeting from president Matt Cecil, before beginning to make their case for why Fiji is the best house on campus.

Founded on campus in 1856, Phi Gamma Delta currently holds the record for the best average GPA among its members on campus and it prides itself on the diversity of its members, not only racially but by major as well. Andrew Muth, Fiji treasurer, said the fraternity has a member from virtually every department on campus.

"Diversity in Fiji is more than just race and ethnicity," said Noe Flores, senior and Fiji member, during his speech to the possible pledges. "It's our various cultures that give us a unique perspective."

The night began with a speech from Merla Miner, the house mom and cook who has been with Fiji for eight years.

"I have the greatest men in the world here," Miner said. "There is a brotherhood here that I greatly admire."

Miner explained to the interested freshmen that the kitchen could make any meal from any recipe, and they have kept recipes from former members from many different cultures. Miner has had many past occupations, such as trader, stockbroker and financial advisor, but she said her time with the Fijis has been the most enjoyable.

"Other house moms will tell you their house is the best...but I am the one that's telling the truth," Miner said. "I hope you're smart enough to be here."

Flores spoke next about the issue of diversity in the fraternity. During his speech the fraternity members held a "popcorn" session. Flores began by calling out a fellow fraternity member and then stating a "fact" about him, and then that member would call out another until all members had mentioned one another. Not all facts were accurate, and others exaggerated, making jokes about other members' hair, social activities and other stories, but many were entertaining enough to get a rise out of the audience and the fraternity members.

"It's interesting to see how diverse the members of the fraternity are," Muth said.

After the popcorn event, each prospective visitor toured the entire house with one or two Fijis, asking questions and seeing the rooms in the dormitory. Touring members saw rooms, bathrooms, the library and the Brotherhood Room, a game room containing a big-screen television and a foosball table, which Gerard Pannekoen said he had a large part in bringing to the fraternity.

During his speech after the tour, Pannekoen recalled being a freshman at DePauw and initially not wanting to be part of Greek life.

"I didn't have a great desire to be part of the Greek system," Pannekoen told the freshmen. "The Greek system seems divisive...I heard things...but looking back, there was never really an option for me."

After realizing that Greek life was for him and joining Fiji, Pannekoen took it upon himself to clean the foosball table, which he claimed started a foosball boom that lasted several months until the table broke. After mentioning the broken table in the fraternity newsletter, an alumnus donated the money for a new foosball table.

"At that point, I felt pretty powerful," Pannekoen said.

Pannekoen reminisced about his first year at Fiji and how the upperclassmen were willing to get to know him even if they had only one year left on campus. He said he felt accepted and comfortable in the house, and he was able to share in the collective experience in the fraternity with his fellow members.

"Your presence is acknowledged and cherished," Pannekoen said.

As the group filed out at the end of the event, the members of Fiji followed, chanting the house name proudly and hoping to add another 20-25 members to what they consider to be the best house on campus.

"If you join Fiji, you're going to have a good time here; I promise," Pannekoen said.