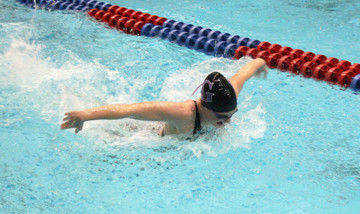 INDIANAPOLIS -- For the top half of the Greencastle girls' 200 medlay relay team, Friday night was a promising start. For the girls in the third and fourth legs, it was a satisfying ending.

The team of freshmen Sydney Cassida (backstroke) and Emily Wheeler (breaststroke) and seniors Melanie Bittles (butterfly) and Sydney Terry (freestyle) swam a 1:58.25 at the Indiana University Natatorium to finish 31st in the state.

Bittles and Terry saw the end of their high school swimming careers Friday, but they were able to do it in one of the world's most famous pools.

Terry talked about the culmination of her four years, and the chance to bond with the younger girls, particularly the freshmen. It all came together for their run to state.

"We just bonded together, which makes for a great relay," Terry said. "This meet's just like the icing on the cake. I know it's great for them -- it's great for me, my last meet ever. There was no pressure to the race at all. It was just a fun time. We had a great time."

Bittles agreed, taking special joy that she and Terry -- the only two seniors on the GHS squad -- made it to state together.

The two freshmen were also all smiles after the race, overwhelmed at coming so far and anticipating what will come next after swimming so well in their first year of varsity.

"I never expected that I'd make to state my freshman year. I never imagined being this far," Wheeler said. "I really think this is a great start to my high school career as a swimmer. I'm just looking forward to the next three years to come. I can only hope it gets better."

Both girls want to be back -- multiple times.

I didn't think I would do it my freshman year, but I'm glad I did. It's fun, good experience," Cassida said. "I'm really excited for next year and hope to come back, maybe in more than one event."

Luke Beasley, completing his fourth and final year as GHS girls' coach, liked the way this team was able to send him off.

"We wanted to get a 1:57, but I thought they swam pretty well," he added. "It's tough when you're in the outside lane in the first heat, but they swam well. They were right there with everybody. I'm real proud of them."

Beasley's thoughts, on both his freshmen and his seniors, reflected those expressed by the girls.

"It's a great experience for the freshmen to get their first taste of state," Beasley said. "Those girls are going to be big time competitors."

"(It was) a fun way to end high school swimming for the seniors," he continued. "They can be proud of everything they did and be proud of their performance today. They'll have some good memories to look back on, for sure."