Big second half does in Tiger Cubs 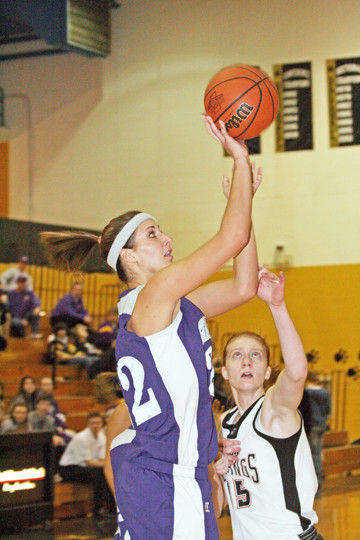 CLINTON -- In its first game of the 2011 sectional, Greencastle battled Edgewood early and overcame a deficit to take a halftime lead. Unfortunately, the Mustangs exploded in the second half and ended the Tiger Cubs' season with a 61-29 defeat.

Greencastle head coach Bradley Key said it all came down to a shift in momentum.

"Edgewood came out with a lot of intensity and knocked down a couple shots," Key said. "They are a defensive team, that's who they are, and we knew that going into it. It's a shame we couldn't carry that momentum we grabbed a hold of in the second quarter and bring that into the third quarter.

"They're the type of team. They're not going to give up easy shots. You're not going to get very many bunnies and when we did get some bunnies we missed them. I think that could have helped," he added.

Greencastle started slow and only managed four points in the opening quarter. However, Edgewood wasn't able to capitalize on the GHS sluggish start and only mustered eight points of their own.

The Tiger Cubs trailed most of the second half, but a save by Taylor Pruitt led to a Mallory Miller basketball. GHS began to make a charge and tied the ballgame at 16-all when Alyssa Nichols hit a free throw with 49 second left in the half. Chelsea Samuels hit a shot with 28 seconds left to give GHS the lead at 18-16 and clearly in control of the momentum.

But thoughts of Greencastle running away with the game diminished quickly as Edgewood came out on fire and scored 16 unanswered points to seize a 32-18 advantage early in the third quarter.

The Tiger Cubs were never able to recover and fell to the Mustangs 61-39. Greencastle was outscored by the Mustangs 45-21 in the second half.

Greencastle's was able to bring in some younger bench players for some minutes which Key thinks will be good for them moving on.

"I'm not disappointed in our effort. I thought our effort was good. A couple rebounds here and there. We got into some foul trouble, which made us a little weak, but it's a good experience for everyone," Key said.

Key also acknowledged the play of his three seniors.

"I think Mallory Miller and Chelsea Samuels just played outstanding. I thought all year Alyssa Nichols, I ask a lot out of my point guard and we run and run. Alyssa Nichols did a great job of handling that pressure," he said.

Talking about what he expects to see from his team next season after losing three of his top starters, Key said he expects good things, but the trio left some mighty big shoes to fill.

"I've got some good leaders coming back. Hannah Wainman and Taylor Pruitt have been with me from the beginning. They know exactly what I want. I told them before the game, I talked to each player about what is expected of them. I think Shelby Earl is going to be a great basketball player. We have a strong eighth grade class," Key added.

As Key reflected more on the season, he spoke about his enjoyment of the team this season.

"I couldn't be more proud of these girls though. From Oct. 25, 26, 27 -- our first day until now, they gave all. I told them I just have a great group of girls. I literally enjoy everyday I had with them. I know some coaches don't -- I did though," an emotional Key said.

Greencastle ends the season with a record of 12-8.