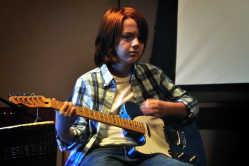 Photo courtesy Jessica Hartman Parker Black plays his Fender Telecaster during a Nov. 21 show at DePauw's Watson Forum. Parker and his dad Jeremy, both students of Johnny Little, played together during the show. A documentary featuring the entire show will air this week on Greencastle's cable channel 3.

GREENCASTLE -- Local guitar teacher Johnny Little likes to give his students a taste of the real rock 'n' roll experience.

For a couple of years now, he's been having concerts for his students, giving them the chance to perform for real audience.

The most recent show took place at DePauw's Watson Forum, at the suggestion of Little's friend and bandmate Chris Newton, assistant director of the Pulliam Center for Contemporary Media.

While the goal of the show was to give the students a chance to work with professional-quality equipment and acoustics, it opened up another opportunity: a movie.

"(We had) such great production value because of the room," Little said.

And so, not only did the young students get a chance to perform a rock show, they also had a chance to be in a music video, of sorts.

Everything was filmed -- the show, the rehearsals, interviews before and after the show.

The result is "Rock Show!" a documentary featuring interviews with Little, Newton and all the students. It documents the process of making the show as well as the thoughts of students and teacher on the performance, their progress and their music overall.

"Rock Show!" will air at 7 p.m. each night of the coming week on channel 3 of both Greencastle cable systems (Cinergy MetroNet and Comcast).

Little said at the time of the concert he liked that it gave students a chance to play in front of someone.

With an even wider audience having the chance to see them, the film is simply an extension of the exposure.