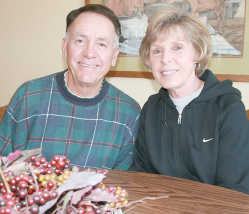 Banner Graphic/Jamie Barrand Mark and Pat Zerbonik of Greencastle, who have been married for 46 years, are regular blood donors.

GREENCASTLE -- Mark and Pat Zeronik are always looking for ways to give of themselves -- and one way they do that is by being regular blood donors.

"I first really thought about blood donation when I had a miscarriage in 1967 and had to have a transfusion," Pat said.

But the Zeroniks were a young couple at the time, and their family and careers took much of their time and energy.

It was many years before they started donating blood.

"Mark first gave in 1993, and I think I did it for the first time right around then, too," Pat said.

Pat has always been willing to donate, but has been turned down several times because of iron deficiency.

"We don't keep great records, but those numbers are pretty close," Mark said.

Although they don't give blood every time they are able (donors are eligible to give every 56 days), Mark and Pat make sure to donate at least a few times a year.

Mark is humble about the contributions he and his wife have given by way of blood donations.

"We have always given blood because it's the right thing to do," he said.

The next time the Zeroniks plan to donate blood is on Tuesday at St. Paul the Apostle Catholic Church, where they are longtime members.

"I think at St. Paul we always have a good turnout," said Pat.

The blood drives at St. Paul are overseen by representatives from the Indiana Blood Center.

"They're nice people ... very nice people," Mark said. "They're good at what they do. And they stick around. You see the same faces year after year, time after time."

According to information at the Indiana Blood Center website, blood supplies in the Hoosier state are at critically low levels.

"Pretty much anyone can give," Mark said. "I don't think they turn many people away. If someone gets in a jam at the hospital, they need blood, period. I never did ask anybody about where the blood came from when (Pat) needed it. I just wanted them to have it to give to her."

The donation process has gotten "very refined" over the years, Mark said.

"They're particular," he said. "They ask you about your antibiotics and your medicines. You have to fill out a paper when you donate, and pretty much every time you fill it out it's different. They ask a lot of questions and are very thorough."

The Zeroniks, who will celebrate their 47th wedding anniversary in October, met through a mutual friend when Pat was 20 and Mark was 19.

Pat worked as a hairdresser at at Eli Lilly, and is now technically retired, although she works one day a week at Best Buy in Avon.

Mark was a building trades sheet metal worker for 40 years, retiring in 2002.

The couple has spent their lives raising their family and building their life together.

And now, they make sure they do what they can for others.

"We're just happy we can help," Mark said. "When you're blessed like we have been, it just becomes your turn."