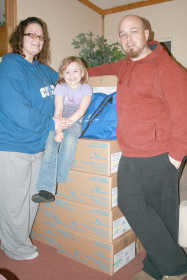 Nathan and Jennifer Bousman, along with their youngest daughter Emma Grace, 5, pose with Nathan's peritoneal dialysis equipment, which takes up about a quarter of the family's living room.

GREENCASTLE -- Nathan Bousman seems to have it all.

He has been married for 13 years to his wife Jennifer, and they have four daughters. He owns his own plumbing business, which is flourishing.

The Bousmans have extended family and a solid church family.

This diagram from the National Kidney and Urologic Diseases Information Clearinghouse demonstrates the method needed to complete dialysis at home.

The one thing Nathan doesn't have is healthy kidneys -- and the 34-year-old is in need of a transplant.

Talk of a transplant for Nathan began in 2005 after he was diagnosed with chronic kidney failure. Doctors could offer little reasoning for why Nathan's kidneys were failing -- he was told it was likely due to infections that had left his kidneys scarred.

Nathan, a 1995 Greencastle High School graduate, first learned his kidneys were failing during a routine physical conducted while he was on active duty with the National Guard.

While doctors warned Nathan he would eventually need to think about a transplant, it didn't become a critical issue until just recently.

"My mentality was, 'When the symptoms come I'll deal with it,'" Nathan said. "Thing is, the symptoms never came. I wasn't worried about it because I didn't feel bad."

When he was first diagnosed with kidney failure, Nathan's kidneys were functioning at 85 percent.

Now, they're functioning at 11 percent.

"I've got three, maybe four people in line to be tested to see if they could donate for me," Nathan said.

The best option for an organ transplant match for Nathan -- who has type O positive blood -- would be a sibling.

Unfortunately, that is not an option.

In a strange twist of fate, Nathan's brother Matthew passed in August 2008 as a result of anaphylactic shock caused by bee stings -- and the family donated all of his organs, including his kidneys.

"If I had known then that my kidneys were going to go downhill so fast, we could have had him tested to see if he was a match," Nathan said.

Members of the church the Bousmans attend, Greencastle Christian, are in the process of putting together a donation drive to test possible matches for Nathan.

By the time he was told he would need to go on dialysis, Nathan had begun his own business, Bousman and Miller Plumbing.

Unable to devote the time necessary for traditional dialysis treatment, Nathan opted to treat his kidney disease with peritoneal dialysis.

"I have a crazy work schedule because I run my own business," he said. "I didn't have time to have dialysis in a clinic."

Nathan had a port put on Jan. 7 in so he could do his own dialysis. He started giving himself treatments a little over a week ago.

The solution is then drained out through the tube and discarded after it is measured.

Nathan does three "change-outs" a day. He carries the bags of solution -- which weigh about five pounds at the beginning of a dialysis cycle -- under his shirt as he works or does other day-to-day activities.

He does his draining and exchanges at home. In the first four days of treatment, Nathan lost 15 pounds.

When the first delivery of a month's worth of dialysis supplies showed up at the Bousman home, neither Jennifer nor Nathan was prepared for the sheer volume.

Boxes, stacked halfway up the walls, now take up about a quarter of the family's living room.

"I couldn't believe it," Jennifer said. "When it came, I told Nathan it didn't really go with my decor."

Jennifer took classes to learn how to do the dialysis, so she can help her husband.

Doing dialysis at home is a very precise process, involving face-masks and constant hand-washing to avoid possible peritonitis (inflammation of the peritoneum).

The Bousmans' youngest daughter, Emma Grace, 5, can spout off what pretty much every piece of her father's dialysis equipment does, and is very serious when she talks about the need for masks to "keep germs away."

If the Bousmans travel any distance or go anywhere, they have to consider how long they will be gone and what they need to take so Nathan can still do his dialysis.

Nathan said he "has a new appreciation for what pregnant women go through" after having to fill up with the solution.

"At least I can have relief by dumping it out," he said.

Until a kidney donor is found, dialysis will be a part of Nathan's daily routine.

"There's no known length of time that I can do this before I absolutely have to have the transplant," Nathan said. "I've heard of people who have been on dialysis for 20, 25, 30 years."

Nathan is in the process of being put on a transplant waiting list, and said he will do dialysis for as long as he has to.

Jennifer said her husband's positive attitude and willingness to do what has to be done have kept her grounded.

"He's solid as a rock," she said. "He never wavers. He doesn't think twice about doing whatever he has to do. He's very strong."

"Being worried about it's not going to change it," he said matter-of-factly.

Despite his low kidney function and having to do dialysis, Nathan said he has never really felt all that bad.

"If I was a betting man and I didn't know any better, I'd swear I was perfectly healthy," he said. "They say my age has a lot to do with the fact that I don't seem sick."

Jennifer said she has only seen minor outward symptoms of her husband's illness.

"He's had a little puffiness and some edema (swelling) in his legs," she said.

The Bousman's four daughters -- Tiarra, Kiersten, Mary and Emma -- range in age from 5 to 19. The three youngest are at home, while the oldest is studying at Ball State University in Muncie.

Even though doing dialysis has been an adjustment, Nathan knows he is luckier than some who suffer from the condition he does.

"I really consider (being able to do at-home dialysis) a blessing," he said. "I work every day. I deer hunted all season."

"Still, every time you have to do (dialysis) is the most inconvenient time in the world," he said. "But it's my life. I gotta do what I gotta do."