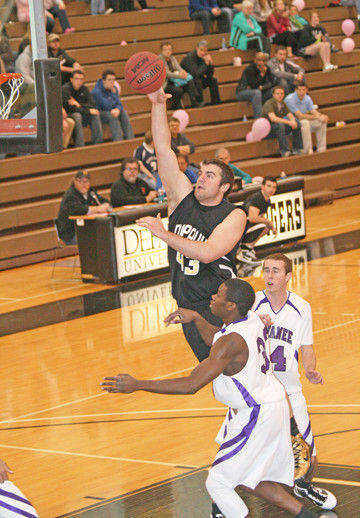 DePauw's Ryan Sever goes up strong for two of his 26 points in the Tigers' 84-70 victory over Sewanee.

Though the hosts started off strong and put continual pressure upon the Sewanee defense, the visiting Tigers knocked down eight three-pointers to keep DePauw from running away early in the game.

The Tigers lead by 12 with four minutes remaining in the first half but their inability to keep Sewanee from knocking down long distance shots saw the lead evaporate to three points twice in the final two minutes.

A Ross Simpson three pointer, followed by a Ryan Sever lay-up that completed a 6-6 first half of shooting for the senior, pushed the lead back to eight at the halftime interval.

DePauw came out of the intermission strong, limiting Sewanee to 10 points in the first ten minutes of the second half. The Tigers, shooting 64 percent in the second half from the field, pushed the lead to as high as 24 points.

The hosts soon began to shuffle in and out their seniors in their final home contest of their DePauw careers.

There was even time for injured senior Joe Bergfield, who was sidelined for the remainder of the year with a stress fracture, to make a one minute appearance, knocking down three free throws before being taken off to a standing ovation by the crowd and teammates alike.

Sewanee cut into the lead late but never threatened the Tiger lead in the second half as DePauw won their sixth straight game to still have a chance to claim a number one seed in the upcoming SCAC tournament.

Much of the improvement in the second half came down to defensive, according to Tiger head coach Bill Fenlon.

"We were better defensively. The first ten minutes of the second half, we did a much better job of guarding the things that were giving us problems in the first half," Fenlon said.

"I thought our attention to detail was a little bit better. We were guarding them like guys you would play in a pick-up game and they're not playing pick-up basketball. They've got stuff that they're trying to do.

With two games left before the SCAC tournament, Fenlon said the Tigers need to be focused on the upcoming road trip.

"We just need to play better next weekend and then on Sunday we'll know who were playing in Jackson, Mississippi. What other teams do doesn't impact us very much. We just need to go down there and do a better job when we play Birmingham-Southern than we did the first time," Fenlon said.

Fenlon also noted that the final stretch of games will cover some mileage as DePauw travels to Alabama, Tennessee and Mississippi in a week.

"That's really tough. It's not set-up very well. It's bad when you're on a long trip and then have to go back on the road for the conference tournament. That's probably the worst case scenario but that is our scenario," Fenlon said.

"We're going to take tomorrow off and try to keep our guys as fresh as possible. I talked to them today. We've won 10 of our last 11 games after we were reeling around Christmas time. We lost four games in a row and we regrouped.

"Today, in the first half I thought we weren't playing with the kind of edge that we had been defensively. Those things happen when you've had some success. We've had 5-6 weeks where we've played really good basketball and then the sense of urgency goes away a little bit," Fenlon said.

"There's a lot of urgency when you've lost four in a row. You need to get the ship righted. The urgency isn't quite the same when you've won 10 of 11, so we need to get our edge back in this next week and continue to compete at a better level."