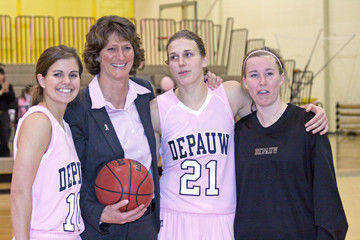 GREENCASTLE -- In all began in 1993, when Kris Huffman took over the DePauw women's basketball program. Eighteen years later, Huffman recorded her 400th career win at DePauw and has no plans of slowing down.

Following Sunday's 87-41 win over Sewanee, Huffman took some time to reflect of what the career milestone means. Ironically, she said she never really thought about milestones as her career began.

"No, I've never thought about those milestones that's for sure," Huffman said. "I have to admit, I didn't even know 200 and 300 were coming, so I liked that a little better than I like this. I started hearing the clamoring behind me, but I didn't read a thing.

"I certainly don't want to steal any thunder from our seniors, but I told them it's an honor that we did this together today," she said.

Huffman also said there was a lot less pressure to notch her first win as opposed to her 400th.

"That first win back in '93 was a tremendous, hardworking group, but we were building a program then. There was maybe a little less stress then," Huffman laughed. "It's easier to build than maintain."

The Tigers under Huffman's direction have captured nine SCAC titles and two ICAC titles. In typical Huffman fashion she was quick to acknowledge and give credit to those who have helped her, as she's collected wins over her career.

"This is special. To be someplace for 18 years and to have the quality of people and players go through the program that are part of those wins is very, very special," she said. "And a special thanks to the coaching staff that I've had, especially Mary Smith who's been part of every one of the 400 wins. That loyalty and continuity makes a huge difference."

But if anyone harbors any thoughts a milestone such as 400 career wins will change her, Huffman said the day was nice, but her sights are set down the road.

"It's certainly an honor to have the 400 at DePauw with these teams. I'm such an on-to-the-next-thing person, so I'm probably be worrying about Birmingham Southern and Rhodes tonight later on," Huffman said with a smile.

DePauw will travel to Birmingham Southern Friday at 6 p.m.