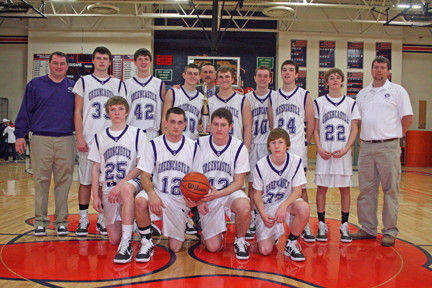 ROACHDALE -- The Greencastle boys' junior varsity basketball team capped off a county sweep by the Tiger Cubs Saturday. With its 47-30 win over South Putnam in the Putnam County tournament, Greencastle won county titles in seventh and eighth grade, as well as varsity and junior varsity levels.

The Tiger Cubs didn't begin the season in spectacular fashion, but head coach Doug Hudson said the team has come together in recent weeks.

"This group most people know, started 1-5 and we were really concerned because they hadn't messed real well," he said. "But over the last, probably two and a half to three weeks, I think they've started to understand what it takes to be successful. That says a lot for them.

"With the ice storm, we didn't have a lot of time to practice. I was little bit concerned this morning how we were going to come out. We came out strong this morning and I want to give all the credit in the world to Chris (Jones) and South Put because they did a great job."

Early in the contest, Greencastle wasn't able to pull away from a feisty South Putnam squad, and led only 6-5 after one quarter of play. After the Eagles took a 7-6 lead at 4:37 in the second quarter, GHS scored eight unanswered points to seize a 14-7 advantage and a 22-11 lead at the half.

Michael Muncie led the Tiger Cubs with 10 first half points, with Nate Christy chipping in eight off the bench. Hudson thought the lift Christy gave the team was huge.

"Nate Christy came in -- he's very capable of shooting the ball," Hudson said. "I'm not sure how many he had today, but he hit some big threes, especially in the first half. We were up 12-9 and then went on about a seven to eight point run at the end of the half, which I think was the difference in the game.

"Overall, a real good day for everybody," he added.

South Putnam head coach Chris Jones noted he thought it was the Eagle turnovers in the first half that put them behind the eight-ball.

"At times our defense was pretty good and overall our defense wasn't bad," Jones said. "We let them get into the lane a little too much and we turned the ball over which transitioned into them having easy lay-ups. I think in the first half they probably had eight points off of our turnovers and we were down 11.

"So if we don't make those turnovers and maybe create shots, we might be down three to five, which changed the complexion of the game," he added.

The Eagles began to make a run in the third quarter, outscoring the Tiger Cubs 11-8. South Putnam closed the quarter with Sawyer Arnold getting three the old fashioned way. Arnold was fouled while shooting a three-pointer with 2.7 seconds left in the quarter.

Arnold hit all three free throws and pulled the Eagles within 10 at 32-22.

South Putnam stayed close to the Tiger Cubs, but midway through the final quarter, Greencastle was able to knock down some buckets and pick up the 17-point win at 47-30.

Jones acknowledged his team played perhaps its best game of the year in their first game against North Putnam. He said they did everything well, but in their second game was unable to handle the pressure the Tiger Cubs threw their way.

He also said the team has the ability to post a winning season in their final three games of the season.

Entering Saturday's championship game, Hudson said he knew it was up to his team to procure the season sweep for county boys basketball and he didn't hide that fact from his team.

"I kept telling them all day, 'Let's make some history' and they did," Hudson said.