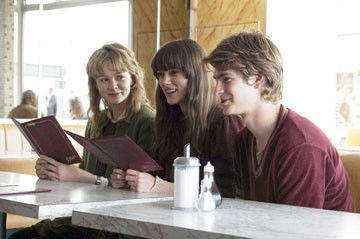 Carey Mulligan, Keira Knightley and Andrew Garfield star in Mark Romanek's "Never Let Me Go". It's a powerful film set in an alternate history we might find familiar yet disturbing.

I anxiously awaited my full review copy of "Never Let Me Go", the film I dubbed as my personal favorite of the year. I watched it twice right from the get go when I received my awards season copy and haven't returned to it.

In the meantime, I've rewatched "127 Hours" and "Blue Valentine" in the meantime, so I was curious if "Never Let Me Go" would hold up? After watching it and its extras I can say I made the correct decision. It was a tight top three films, but the uniqueness of this film in particular stood out.

As I said at awards time, it's a powerful mish-mash of genres, which mixes an altered history with a tale of people who are cloned for the sole purpose of becoming "donors". Essentially a "donor" is someone who is created to harvest their organs and their "Carers" are there to give solace to them.

Carey Mulligan and Andrew Garfield give stellar performances as two youths who grow up together, but whose paths taking them in different directions. Mullignan's "Kathy" is a carer and Garfield's "Tommy" is a donor and its their emotional, yet tragic, love story which propels the second half of the film especially.

Screenwriter Alex Garland creates a surreal world where cloning became started in the 1950s and is common place in the 1970s. I found it interesting that instead of setting a donor program in a distant future, Garland and novelist Kazuo Ishiguro decided to set it in a reality, albeit an altered one, that we are all familiar with.

What set the movie apart for me is the fact that it mixed so many genres and ideas and completely pulls it off. Not for a single moment does anything fill unoriginal, false or disengenuous.

This is director Mark Romanek's third feature film, but it feels like he's been doing it forever. The film is simple looking, but its the perfect contrast against some very big ideas.

The only thing I wish the disc had was an audio track with Romenek, Garland and Ishiguro as well as one with the three principle leads, Mulligan, Garfield and Knightley.

Final Cut: "Never Let Me Go" is a mesmerizing film, which explores the true depths of soul penetrating love. It's a truly remarkable film.

MPAA Rating: R for some sexuality and nudity