County population up 5 percent since 2000 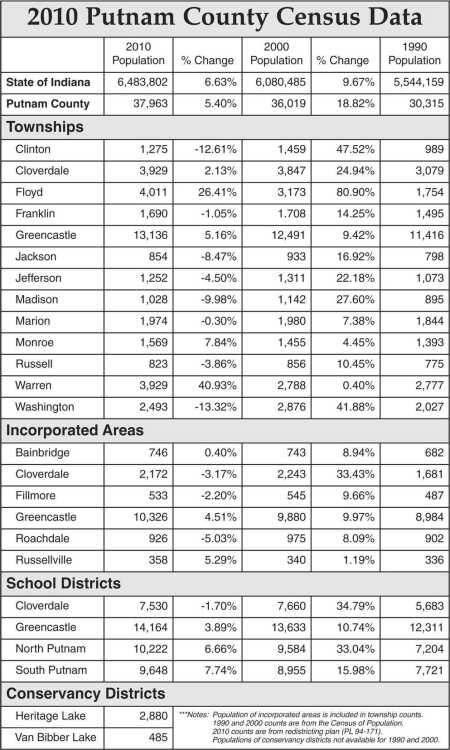 GREENCASTLE -- The Putnam County population grew by 5.4 percent in the last 10 years, falling slightly below the state's percent change of 6.63 percent.

The State of Indiana recently released an extract of its United States Census 2010 redistricting data, which reveals the county has seen a population increase of 1,944 since the 2000 Census.

While the county as a whole has grown, only five of 13 townships have actually experience population growth: Cloverdale, Floyd, Greencastle, Monroe and Warren.

The report is a far cry from the previous 10 years. Putnam County saw a population increase of 18.82 perecent in the 1990s, nearly doubling the state's average of 9.67 percent.

However, growth still seems to be occurring in and around Greencastle, Heritage Lake and Cloverdale, the county's three most populous areas.

The South Putnam School district, which includes Jefferson, Marion, Warren and Washington townships, is up 693 (7.74 percent) over 2000. The large gain in Warren Township made of for mild to moderate population loss in the other three townships.

Likewise, the 638 population increase (6.66 percent) in the North Putnam district is paced by the gain of 838 in Floyd Township. Elsewhere in the district, only Monroe Township experienced gain, with an increase of 114 (7.84 percent).

The Greencastle school district is up 531 (3.89 percent), with much of this growth coming in the City of Greencastle itself.

While Cloverdale Township saw a mild population increase of 82 (2.1 percent), the Cloverdale Community School District actually shrank by 130. This was due to a population loss in Owen County's Jackson Township, one of three Owen townships the corporation serves.

Among incorporated areas, only Greencastle, Bainbridge and Russellville experienced population growth in the last 10 years.

While data is unavailable for conservancy districts from the previous two censuses, Clear Creek Conservancy (Heritage Lake) reports a count of 2,880, contributing to the increase in Floyd Township overall.

Among its bordering counties, Putnam was only outpaced by Hendricks County, commonly considered one of the fastest growing counties in the nation. The Hendricks population is up 39.7 percent.