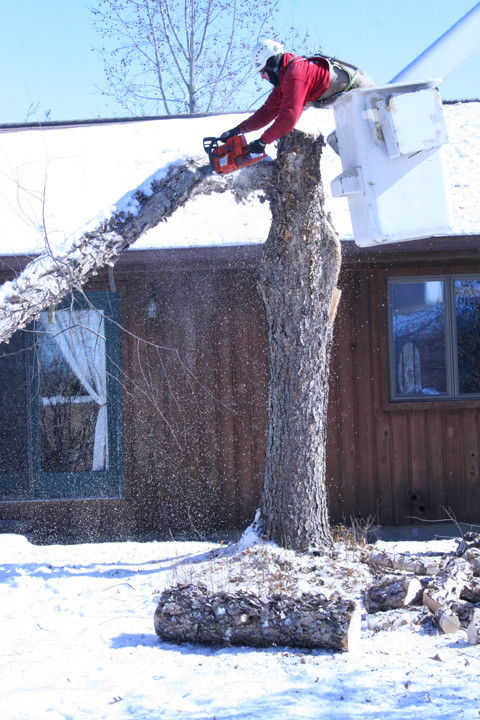 Andy Lorimer works to take down a tree that was leaned against a house. Trees are still an issue in Putnam county because of damage from the recent ice storms.
Order this photo

With the recent warm spell, the ice and snow from the bad weather that shut Putnam County down a few weeks ago has disappeared, but one reminder remains -- the scattered tree remnants.

Susan Lorimer with D & S Tree Service Inc. said it took her company a while to be able to approach some of the tree issues left over from the big storm.

"(Last week was) the first week that we've been able to get any of the equipment out and help people," Lorimer said. 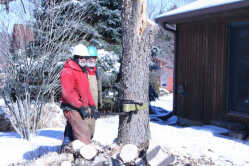 Sam Lowe and Bill Lee are removing the device used to secure a tree.
Order this photo

Andy Lorimer, her husband who runs the business, agreed.

"At first, it was just me in my pick-up truck, clearing out driveways. The roads were too icy to get the equipment out."

Susan Lorimer expanded on that, saying that, until the thaw this weekend, there were some country roads that could not be traveled. She compared the trucks her company uses to buses, in terms of their ability to handle on icy roads.

Susan Lorimer gave one example, of a large tree leaning against a house that couldn't be worked on simply because of how bad the roads were until last Thursday.

"It was probably one of the most critical in terms of trees on the house but we just weren't able to get down the county roads yet. Those bucket trucks, they'll slide."

Because of the volume of trees downed, Susan Lorimer said the company has had to focus on customers with the most need.

"Our priorities have had to be to get them out of their driveway, get the trees off of their houses and then clean up. There are several people still waiting on us. We'll be out (this) week in full force in clean up mode."

Andy Lorimer said he had to divide some jobs up, completing the most important part then leaving some parts for later.

"With some, I just had to make a pile in the lawn and come back for it later," he said.

"The best advice right now is to make safety as your main concern. Always wear your hardhats. A homeowner going out there, trying to (deal with damaged trees) -- watch for those limbs up in the trees. ... They're called widow makers for a reason. Those limbs will come down. We get a magazine we get every month that has a whole section on accidents and deaths. We see that every month. Unfortunately that's just the way that it is. Safety should be the main concern for the homeowner."

Susan Lorimer said people will sometimes call her after they attempt to work on trees themselves.

"We talked to a lot of people or they call in and say 'well, I got the ladder and the chainsaw and I try to get that thing myself.' Okay, ladders and chainsaws don't go together. Then you add the ice on top of that and it definitely doesn't go together," she said.

Susan Lorimer said there have been people who have injured themselves trying to deal with branches and limbs. Another problem arises when people try to work on trees.

"Sometimes when people try to do it themselves and it doesn't work and then they call us out -- the way that we would have taken that tree down, we can't do it now because the limb may not be there or we can't tie onto it the way that we need to and we have to go a different route to get the tree down," she said.

Susan Lorimer said homeowners need to be cautious towards people offering to do such work. If the person doesn't have insurance and workers compensation, they could be held liable for any injuries that occur.

The city of Greencastle will perform a tree limb pick up from March 1 to March 11, following trash routes. Eight inches is the maximum diameter for limbs that will be picked up. The city will only be making one round down each road and suggests that residents put limbs out the week prior to pickup near the curb or between the sidewalk and street.

Additionally, the West Central Solid Waste District yard waste site will be open on March 5 and 12 from 10 a.m. to noon for any who wish to take their limbs there. The site is located west of the county highway garage.