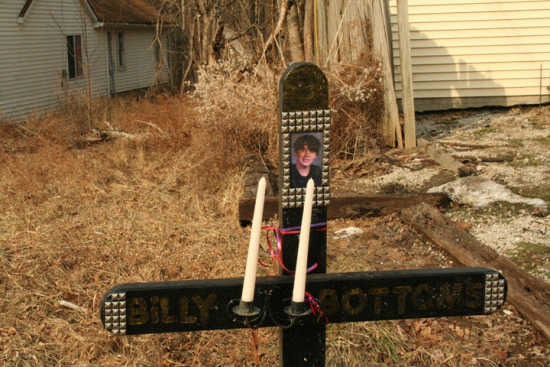 This memorial was erected at the site where Billy Bottoms was killed by a hit-and-run driver on Jan. 22. The memorial is decorated with traditional items like flowers and candles as welll as a few other items such as a can of Monster energy drink, a newspaper clipping and studs.
Order this photo

CUNOT -- The father of a Cunot boy who died in a hit and run accident said that he hopes more witnesses are able to come forward in the death of his son.

Terry Bottoms, the father of Billy Bottoms, 12, who died after a hit and run accident Jan. 22 as he was walking home from an event at the Cunot Community Center, said he is still hoping to learn more about what happened the night his son was struck.

"What we need now is for people that were here that night that saw what went on or know something now that they forgot to mention to continue to call in anything they know," Bottoms said.

Bottoms said he hopes people who came forward before are able to provide more details about what happened on the night of his son's accident.

"There was a guy coming towards the car that hit Billy, going the opposite direction, Bottoms said. "I know he stopped and said that he said he had to swerve to avoid hitting the car that hit Billy. I need for someone like him to come forward again and really go into detail about what he saw, because he was right there when it happened."

Bottoms said while he was very pleased with the work police had put into the investigation of his son's death, some aspects upset him.

"We're really upset that (the suspects arrested in connection with the accident) never got to spend any time in jail," Terry Bottoms said. "They basically walked in and got fingerprinted, went to court, (paid their bond) and went home.

"That's pretty upsetting," he continued. "I know people who get stopped driving without a license and they go to jail. These people didn't go to jail. It Kind of upset me, really. Supposedly they were arrested. Well, if you arrest somebody, lock them up."

VanDerMoere said the bond process isn't meant to be a punishment. Once a bond is posted, a person is free to go.

"All three of these folks are presumed innocent," Van DerMoere said. "We think we have probable cause to believe they have committed a crime but until a jury decides that or they plead guilty or some other resolution comes, we're still facing trial."

Bottoms reiterated that he's happy with what investigations have accomplished so far, but said he was confused that more people haven't been charged in some manner.

"When I read (the investigator's supplemental report), it just seems like there would have been more charges. I don't know if there will be or not," he said.

The investigator's supplemental report states that during interviews all three people charged in the fatal accident mentioned another party helped them replace the windshield in the black Malibu involved in the accident.

"We've got a detective and an investigator that are looking to further this investigation if at all possible," he said. "That doesn't mean that anybody else could even potentially be charged. At this point that investigation is still continuing."

Bottoms wanted to express his appreciation for everyone involved in the investigation.

"I want to thank everyone who called in leads and the hard work that law enforcement has put in on this," he said.