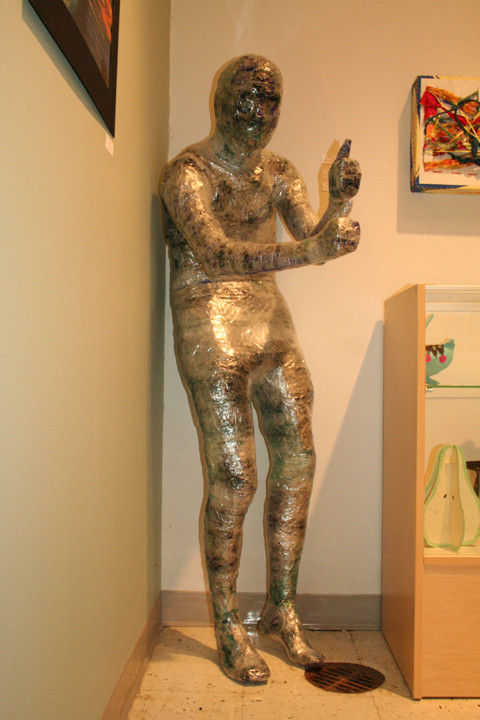 This package tape sculpture was created by students at South Putnam High School. "Thumbs Up" was made by Chad Vaughn, Chris Wisener and Jorge Cavell with Cavell modeling.

GREENCASTLE -- This Saturday, the Putnam County Museum will be opening their Student Art Show.

One hundred thirty-four pieces of art created by children from kindergarten all the way up to seniors in high school will be on display from 10 a.m. to 2 p.m.

"It's my favorite show that we do. I love it," said Tanis Monday, the director of the Putnam County Museum. "I love the colors, the creativity of the children, I love to see young minds and how they see the world. It's just a very fun show to have and the opening is always so big with lots of people in here."

There will also be awards handed out, which will be chosen by judges in different categories.

"We do three judges choice awards in each age category." Monday said.

Monday said she had one judge who is used to interacting with children and another judge comes from an art background.

"I try to get a wide variety of judges. By no means are we saying that (the award winners are) the best art piece, it's just the one the judge picked," Monday said

In addition to the awards there will also be participation certificates for all the students involved.

"Without them participating, we would have no show. I appreciate each and every one of them," Monday said.

Monday said a pair of sculptures in particular stand out to her this year.

"They took a kid, wrapped them in packing tape, cut the packing tape off and then re-taped it all back together," Monday said. "We have these forms made of package tape that are in the exact form of a person. I've never seen anything like it."

The packing tape sculptures look like shiny, short mummies, transparent through to the paper beneath them.

Besides the art, there will also be a performance by the Western Indiana Theater Troupe, which is mostly composed of an advanced theater class at Greencastle High School. The troupe will perform an interactive presentation on dating violence.

"It's going to present the problem and then viewers will be asked to not necessarily solve the problem but get involved in how can we change the outcome of the skit," Monday said. "I've been to several of the presentations and they really are a very interesting experience."

The Student Art Show will run until the beginning of May.