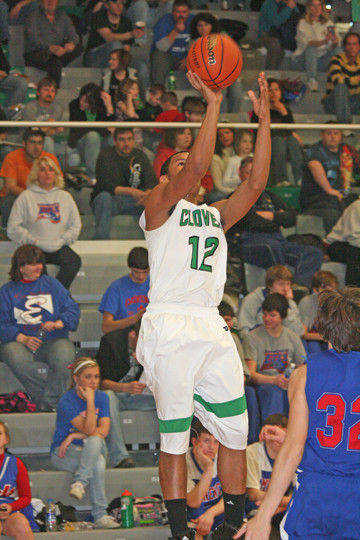 Cloverdale's Donovan Scisney pulls up for a shot against Eminence Thursday.

CLOVERDALE -- Despite shooting a lower percentage from the field and free throw line than their opponent, Cloverdale was able to come away from Thursday's contest with Eminence with an impressive 56-52 win.

And on Thursday it only seemed appropriate that Jordan Hayden stood at the line with 6.9 seconds left with a chance to ice the game. The night began with the honoring of its seniors and it was one of those seniors who ensured the Clovers would end the season with a 10-10 record.

Hayden was able to eye and connect on two freebies and seal the victory for Cloverdale.

"Jordan up there, like I told him, what a way for a senior to go out -- hit a shot to guarantee a win," CHS head coach Pat Rady said.

The Clovers torched the Eels to open the contest and that would prove to be the difference in the game. Cloverdale jumped out to an 11-0 lead before Eminence was able to find its footing and begin to knock down some shots.

The Clovers' one-two punch of Hayden and Donavan Scisney was too much for Eminence. The duo scored 15 of Cloverdale's 17 first quarter points. The pair also connected on three three-pointers.

Cloverdale held a 17-7 advantage and they would need that 10-point gap as the game wore on.

On defense, Cloverdale always had a hand in the offensive person's face and clogged the lanes frequently. Their intensity kept the Eels out of sync and played to their advantage.

Rady is always quick to emphasis that you win and lose as a team and the Clovers were able to show what that mean. After his output in the first half, Hayden was held scoreless in the third. However, junior center Mitch Williams knocked down two three-point field goals and two from inside the arc to lead CHS with points in the quarter.

Again the Eels out-produced Cloverdale to the tune of 18-17 in the third quarter and were not quite done yet. Entering the fourth quarter with a six-point deficit, Eminence gave the Clovers all they could handle.

Eminence was able to battle back and was within four-points for much of the final minutes of the game. It was Cloverdale's ability to stay cool under pressure which allow their to knock down its free throws and provided enough of a cushion for CHS.

Eminence's grit wasn't something that surprised Rady or his team. They did something no other team in the West Central Conference this season -- beat Monrovia.

"That's a good ballclub," Rady acknowledged. "They beat Monrovia the other night and Monrovia won our conference and didn't lose a game. We knew they had played well."

Thursday's game was a busy one with the parking lot full and throngs of faithful fans on each side of the hardwood. Rady acknowledged the impact those not actually on the court had on the game's outcome.

"I think our fans and the student body and the band was like a sixth man tonight," he said. "We had guys come off the bench and contribute.

"We're real pleased the way we have finished this season. To get to be .500 10-10 -- I'm real proud of the team. They have fought hard to achieve this and I'm very proud of each and every one of them," he said.

Cloverdale will take on North Putnam in the opening game of the Class 2A South Putnam Sectional Tuesday at 6 p.m.