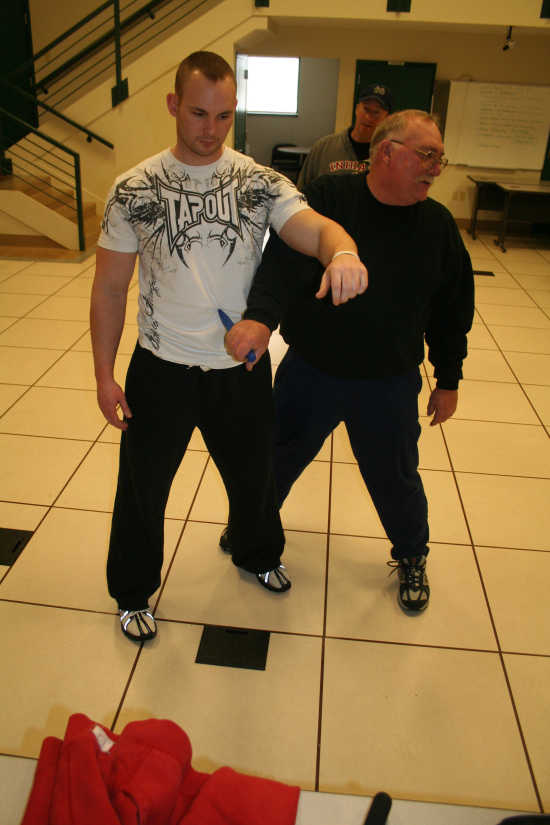 GREENCASTLE -- It's a matter of seconds.

That was the lesson local police officers learned Friday during the alternate rules of engagement training at the Putnam County Emergency Operations Center. The required training focused on defensive tactics in situations from mildly uncooperative subjects to life-or-death combat situations.

"This class will teach you how to survive when the odds are you would not survive," instructor Rodney Fenwick said.

Fenwick, the Bainbridge town marshal, reminded his colleagues that it only takes seconds for a benign situation to escalate into a deadly one. From that point, things can turn deadly instantly.

The class started with a refresher about pressure points. Fenwick reminded the other officers of locations on the body that can cause great pain, but no real damage, with simple pressure.

"Pressure points are a good way to do things with subjects who are a little bit noncompliant," Fenwick said.

However, the thrust of the training was much more about potentially deadly situations.

Fenwick reminded his students of the "22-foot rule" when dealing with suspects armed with cutting weapons such as knives or swords. Getting at least 22 feet away gives an officer time to react to a potential attack.

He also gave a couple of tips on how to recognize a suspect trained in combat. Someone trained in knife combat, for example, will generally carry the knife pointed downward.

The most important lesson, though, was that in situations where a suspect has pulled a deadly weapon, it becomes life or death for the officer. While law enforcement professionals are trained to do everything to avoid the use of deadly force, sometimes it becomes a matter of kill or be killed.

"You never quit. You quit when your last breath leaves," Fenwick said. "You never stop because if you stop, they've won."