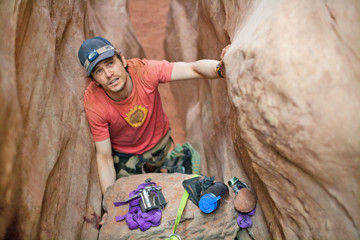 With nothing to play off of but a rock, James Franco delivered one of the most moving performances of 2010 in "127 Hours," now available on Blu-ray and DVD.

That's all I have to say. If the one thing that kept you away from "127 Hours" in the theater was the arm hacking scene, get over it. Sure it's bloody, sure it's graphic, but it's the defining moment of the movie -- as well as canyoneer Aron Ralston's life.

You also might not have seen it due to the fact that its widest release was in 916 theaters. To put that into perspective, "Harry Potter and the Deathly Hallows" opened in 4,125 theaters. But that's the past and now the DVD and Blu-ray is out and you need to pick it up.

I checked out the Blu-ray edition of the film, and while I found it lacking one big element, it has enough goodies to make up for it -- almost.

For those who don't know, "127 Hours" is the story of Ralston, a canyoneer who became trapped by a boulder and ultimately had to amputate his right hand to survive. Trapped for five days, Ralston survived on hardly any food and one bottle of water before making the decision to amputate his arm.

James Franco, who portrays Ralston in the film, delivers a disturbingly raw performance, which earned him an Academy Award nomination. Franco takes us on a journey filled with ups and downs, tragedy and joy and leaves us breathless as the "moment" approaches.

The Blu-ray features a good audio commentary from director and co-writer Danny Boyle, co-writer Simon Beaufoy and producer Christian Colson, but no Franco. This is the only issue I had with the disc. I know Franco is in constant motion, but I really was looking forward to his insights into the journey he took to capture the character of Ralston.

In addition to a very cool featurette "Search & Rescue", that consists of actual events that happened during the search and rescue of Ralston, there are some deleted scenes and the one featurette which made up for Franco's absence from the commentary track.

"127 Hours: An Extraordinary View" explores the collaboration between Franco and Boyle and is awesome. I still would have liked to hear more from Franco, but this featurette does give some insight into the making of the film. I love actors and directors whose passion overflows and after watching Boyle's behavior behind the scenes, he's definitely one of my favorites.

You also get the short film "God of Love", which just won the Oscar for Best Live Action Short.

Final Cut: The blu-ray edition of "127 Hours" is as much of a winner as the movie is. It's a movie that viewed with the right eyes will leave you excited and enthusiastic about life and willing to embrace the challenges life throws at you. A remarkable film with an equally remarkable performance by Franco. One of the year's best.