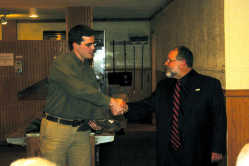 Matt Hertenstein, left, shakes the hand of David English, executive director of the United Way of Putnam County, in honor of Hertenstein's retirement from the United Way Board. Hertenstein and fellow retiree Amber Bowers received a T-shirt and seeds as a parting gift.

GREENCASTLE -- The United Way of Putnam County had a lot to celebrate at their annual dinner and meeting on Saturday at the Putnam Inn. However, they also had some things they wanted to work on for next year.

While they had raised slightly more money than last year, they had not met their goal. Their goal, as it was last year, was set at $175,000. This year, they were able to raise $162,000 for the many organizations the United Way funds, including the American Red Cross and A-Way Home Shelter.

"The more we raise, the more the community gets back," said David English, executive director of the United Way of Putnam County.

The United Way also honored two board members that were retiring at the end of their terms: Matt Hertenstein and Amber Bowers. Craig Chrispell also retired but was not at the dinner.

The United Way has not determined a goal for next year, but they are already looking forward to next year, where they hope to meet their next goal.

The United Way also held their Cayman Islands raffle drawing. The winner would be reimbursed for plane tickets for a week-long trip in the Cayman Islands. The winner was Anthony Ingram, who is part of Putnam County Compensation Services. Ingram was not at the dinner to receive his prize.

The group also held their annual meeting as board members began to dig into dessert. This made voting to approve the minutes and budget a bit difficult.

"Dessert does make it kind of hard to talk," said Tom Graffic, President of the United Way of Putnam County