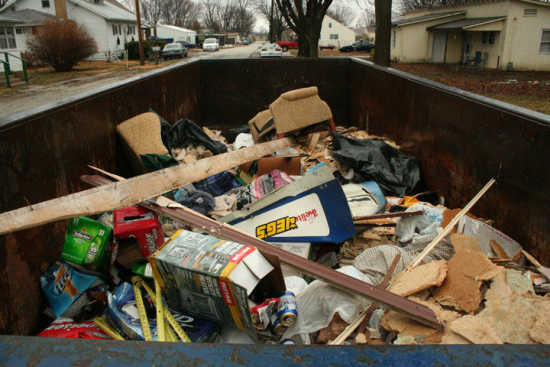 BAINBRIDGE -- Volunteers for the Putnam County Habitat for Humanity spent the day gutting a house as the temperature continued to drop and rain made for a gray and depressing day.

The First National Bank of Cloverdale donated the house, located on College Street in Bainbridge.

"They sold it to us for a dollar," said Habitat board member Tim Mathews. "After taking a look inside I joked that I wasn't sure if they gave us a deal." 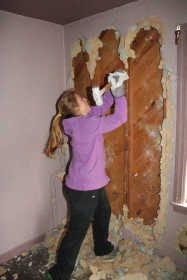 Emily Dye was one of the volunteers helping with the house.

Mathews said the previous tenants weren't kind to the home.

"They trashed it," he said.

A dumpster in front of the house is filled with items taken from inside as the volunteers try and undo the damage.

The house will go to Amber and Jesse Rogers. The two move around the home, helping with different aspects of the repair work.

The couple has two children, Tyler, who is nine years old and Michael, who is five years old. Jesse works in Danville at the high school.

"I take care of the floors," Jesse said.

Mathews said this home, when finished, would cut down on Jesse's commute. It is 18 miles closer to Danville than where the family currently lives.

"I've known this family for a couple of years," he said. "I didn't choose them -- they were picked by the selection committee -- but I'm glad they were chosen."

The air inside the house is musty. Many of the volunteers wore facemasks. After clearing out the debris inside, the volunteers then began to attack the drywall, which needed to be removed to properly insulate the building.

"There's no insulation on any of the walls on the first floor that we've found so far," Mathews said.

Some of the volunteers tearing up the drywall are members of Kappa Alpha Theta Sorority.

Janie Langham said one of the benefits to volunteering with Habitat was the real time results.

"You can really see the results as you go," she said.

"You can always raise money for a cause, but you don't always get to see where it's going," she said.

The two are part of the executive board for Habitat for Humanity at DePauw.

Emily Dye and Emily Boyle were also in the same room. All four acknowledged that Habitat was a way to give back to the community while still keeping a flexible schedule. Clayton said they hoped to do more with Habitat this semester, as the football season kept them busy during the fall semester.

The upstairs of the house was in bad shape, according to Mathews, because of a fire. When the fire was put out moisture got into the floor. Now there's mold on the first floor ceiling. Mathews said the wiring is also suspect, and would have to be replaced.

Along with gutting the interior, the house will require new windows, a new roof, which might be metal, a new air conditioner and possibly a new furnace.

Rain could also be an issue as they move forward.

"The basements got some flooding. We're going to have to deal with that, and the yard will have to be redone," Mathews said.

The yard needs to be redone so rainwater drains away from the house. Additionally, the gutters need to be redone, which helped cause the flooding in the first place.

Putnam County Habitat for Humanity president Chris Scott said he isn't sure if this will result in a less time consuming project than just building a new home.

"We're hoping it's less expensive. Structurally, the house is sound. Gutting a building isn't easy work. It's fun work, but it's not easy," Scott said.

Scott said going forward he hoped to do more homes in the Greencastle and Cloverdale area after doing two in Bainbridge.