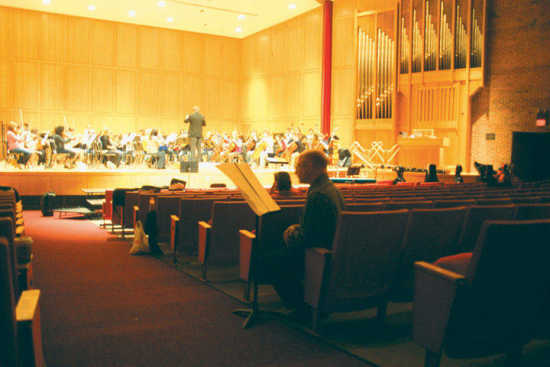 Aaron Jay Kernis is studying the score to his work "Newly Drawn Sky" as the DePauw University Orchestra, conducted by Orcenith Smith, performs it. Kernis was in Greencastle from March 2 to 6 as a composer-in-residence, where he worked with DePauw music students and faculty. Students and faculty performed in three concerts over the weekend featuring different works Kernis wrote in his career.

GREENCASTLE -- Aaron Jay Kernis is one of the youngest and most successful composers in recent history. His work has won him a Pulitzer Prize and the Grawemeyer Award in Music Composition, as well as praise from critics at the New York Times, Chicago Tribune, USA Today and others.

But right now, Kernis, 51, is standing in the left aisle next to the ninth row from the stage in the Kresge Auditorium at the Green Center for the Performing Arts. He never glances at the DePauw University Orchestra as it plays his 2005 work "Newly Drawn Sky," nor does he watch conductor Orcenith Smith.

Kernis is absorbed in the score, a large green book bigger than the music stand it is resting on. With the stand as high as it can go and the music lying perfectly flat and parallel to the ground, Kernis simply looks at the score while eating a rice crispy treat he received from Cafť Allegro. He takes no notes in the score and never averts his gaze. He continues to silently turn pages as the orchestra nears the end of its performance.

But when the first run of the song is over, Kernis calmly walks to the stage and returns to the conductor's podium and, measure by measure, he breaks down the song and gives his advice on how he really meant the song to be heard, some times even going counter to the score in his hand.

Kernis visited classrooms, lectures, rehearsals and more during his visit as composer-in-residence from March 2 to 6. Students who interacted with Kernis described him as a polite, soft-spoken man with a passion for music and conducting.

"His music is both fantastic and incredibly difficult," said Claire Jagla, member of the University Chorus.

Kernis stayed for Jagla's rehearsal after working with the orchestra, where the group performed two of Kernis' choir pieces, "Dorma, Ardor" and "Teach Me Thy Way, O Lord."

"It's really great that DePauw can bring him," Jagla said.

Having a composer able to give their opinion and thoughts about a piece as it is being performed is an enormous advantage that can rarely be replicated, said Smith. Many classic performers, such as Mozart and Bach, obviously cannot be contacted to answer questions about mezzo pianos and crescendos. But Kernis is still establishing his musical legacy, and being able to pick his brain about musical annotations is a very rewarding.

"To work with a composer whose music is new -- it doesn't have a wide appreciation of admirers. We're part of a future," Smith said.

Kernis had a very busy schedule since he was picked up from the Putnam County airport and checked into The Inn on Tuesday night. Aside from attending different rehearsals, Kernis was also featured at several concerts.

On Thursday, Kernis was part of the "Introducing" program, where Kernis spoke with School of Music professor Scott Spiegelberg in front of an audience at the Thompson Recital Hall. Kernis spoke about his inspirations for each song before the different members of the DePauw music program performed them.

In his early career, Kernis said he wanted a more simple progression than the more complicated numbers he has created recently.

"I missed harmony; I missed melody," Kernis said. "I was looking to strip down to the most harmonic elements as possible, as few notes as possible."

Most of these songs were choral arrangements featuring one or two soloists. Conveniently, Kernis mentioned, the program for that night actually went backwards in time progression, starting with the song "Valentines," written in 1999.

Kernis said that when he first was composing, he focused on simple chords or notes, and he tried to arrange them in a way that made them different or unique in tone. This is what he did for "Meditation," a song dedicated to John Lennon. Kernis was living near Lennon's apartment at the time of the shooting, and Kernis chose to take chords from "Imagine" and twist them around.

"What they all mean together I won't begin to say," Kernis said.

The DePauw faculty also performed Kernis' music on Friday at the same recital hall and the university held the final concert, featuring the University Chorus and Orchestra, on Sunday afternoon at the Kresge Auditorium.

After the final concert, Kernis went to the airport and left for New York City, but the impact he has left on the music program, and his love for composition, will not be forgotten.

"It's been my dream to be able to do what I love, and I see that in these performers," Kernis said.