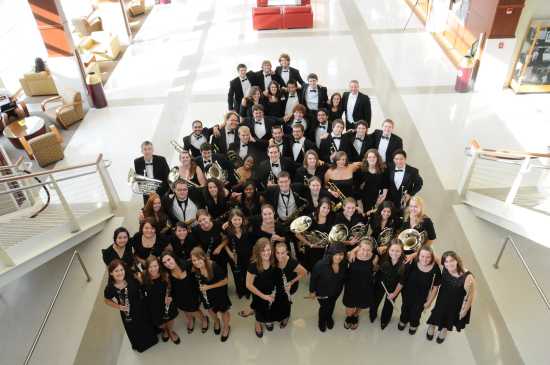 GREENASTLE--The DePauw University Band gave its first concert of the semester on Sunday, giving a six-song presentation at the Kresge Auditorium. But this performance was also a philanthropic event.

The Putnam County Emergency Food Pantry was accepting food donations at the event, which were dropped off in front of the auditorium entrance. The donated items were considered the price of admission. The pantry received canned foods and other essential items. Food pantry president Judy Miller attended the concert and showed her support for the event.

Dr Craig Paré, the band director, was happy to work with the pantry for this event. He said he was a big supporter of the pantry and its mission and he enjoys helping it out.

"How we contribute makes a big difference to the community," Paré said to the audience between pieces. "We thank you for your support."

Diaz plays piano for the band and was also one of the two ushers that stood in front of the theater, handing out programs and collecting donations for the event.

"I like it personally," Diaz said about the event. "I've talked to people who come out just for this. We bring in Greencastle."

The band performed pieces from a variety of time periods, from the Overture to the Opera "Russlan and Ludmilla" by Mikhail Glinka to "Crossing Parallels," a modern work by Kathryn Salfelder, a student of Aaron Jay Kernis, who visited the campus two weeks ago.

It also broadcasted the concert on DePauw University radio station WGRE 91.5 shortly after the live performance.