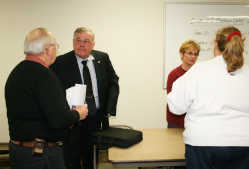 With the 2011 session of the Indiana General Assembly stuck in neutral as Democrats cool their heels in Illinois and Republicans spin their wheels in Indianapolis, frustration has obviously set in.

That much was obvious Saturday morning as about 30 local residents listened to Legislators Jim Baird and Connie Lawson address the status of several pieces of proposed legislation.

With the Democrats' Feb. 22 walkout still hanging over progress on bills impacting education, the budget and everything else legislators hoped to accomplish in 2011, local residents hoped for at least a word or two of optimism. After they received few, if any, Saturday morning at the Farm Bureau office, the frustration grew.

Stressing a point about the current session of the Indiana Legislature, District 44 Rep. Jim Baird (left) responds to an audience question during the Legislative Update program Saturday morning at the Farm Bureau Boardroom in Greencastle. State Sen. Connie Lawson (R-Danville) and Farm Bureau member Steve Cash listen to the exchange.

"Anywhere in your big book of rules," Putnam County Councilman Darrel Thomas asked, "is there anything that would let you just leave, turn the lights out and come back next year?"

State Sen. Connie Lawson (R-Danville) was quick to respond. "Absolutely not," she assured.

Baird (R-Greencastle), the District 44 state representative, had the quote of the day when he followed Lawson's brief comment with: "If you believe in reduced government, this might be one of the best Legislatures we've ever had."

As if on cue, the room laughed in unison, causing Baird to turn to Lawson and say, "Sorry."

Lawson and Baird, however, both addressed the lingering issue in their opening remarks.

"The second half of this legislative session has come to a screeching halt," Lawson said. The bottom line is we need the House Democrats there to work on these bills and do the job they are supposed to do. We need them back at the Statehouse so we can work with them."

She said that 198 bills passed through the State Senate the first half of the session but cannot be assigned to House committees because there is no quorum. Other bills are awaiting second readings and other action as well.

A total of 272 bills are "just sitting there," Lawson noted, "representing the work product of our first half and they're not going to get a hearing. We don't want to lose everything we have worked on to date."

Baird called the situation an "unprecedented time" and said he is concerned about the process and how things are currently operating.

"I don't want to look back 10 years from now," he said, "and say we missed an opportunity (because of this).

"My perception," Baird continued, "is that folks in this area hired me to do a job, and I need to do that to the best of my ability for the most good for the most people."

With the majority of those in attendance involved in education in one manner or another, school issues dominated the brief question-and-answer period.

Baird told the group he supports the teachers and educational opportunities funded by the state budget. He said the budget proposed by the Ways & Means Committee is not only balanced but "protects K-12, and I didn't think there was any way" for that to happen this session.

He urged constituents to stay involved and be aware of what is taking place at the state level.

"There is a lot of misinformation out there," Baird stressed. "I encourage you to dig deep and know what's going on."

"I am going to continue to monitor that," Baird assured. "I want to make sure the kids in our area get their fair share."