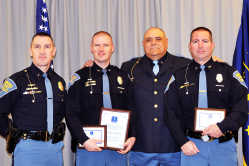 Indiana State Police Troopers Michael Finney (right) and Brandon Mullen (second from left) from the Putnamville Post were honored at an ISP awards ceremony at Indianapolis. State Police Supt. Paul Whitesell (second from right) and Putnamville Commander Lt. Dan Jones (left) congratulated the officers. Finney was named 2010 Putnamville Trooper of the Year, while Mullen was honored with the Life Award for his success in making DUI arrests.

INDIANAPOLIS -- Indiana State Police Department honored and recognized individuals from around the state this week for their dedication to service, bravery and devotion to the department and the citizens of Indiana.

The ISP Putnamville District was represented at the honors ceremony by Troopers Michael Finney and Brandon Mullen, who were both recognized and presented with awards.

Trooper Finney was recognized as the 2010 Trooper of the Year for the Putnamville District.

The command staff nominated Finney at the recommendation of fellow troopers, based on Finney's dedication to his job, traffic and criminal enforcement efforts, special assignments, service as a police canine handler, willingness to assist other state and federal agencies, and performing services for the department beyond normal expectations. Trooper Finney is also a past recipient of the ISP Meritorious Service Award.

Trooper Mullen was presented two awards for his dedication and commitment to reducing impaired drivers on Indiana roadways. He was presented the Life Award for leading the Putnamville District in DUI arrests for 2010 with 116 and a "Top 5" DUI award for finishing 2010 as one of the top five troopers in the State of Indiana in DUI enforcement. Mullen is a past recipient of both the Life Award and the Trooper of Year.

The idea for the awards event was conceived in 2006 by Indiana State Police Supt. Paul Whitesell, who felt the need to publicly recognize achievements and deeds of self-sacrifice and accomplishment that all too often go without the proper recognition.