Get sucked into the Grid again with 'Tron' 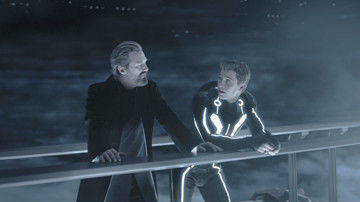 It's always cool to see what things stick with you from childhood. For me, many of my weekends were spent at the Meadowbrook Drive-In, but only two movies stuck with me from all of those adventures. I can remember the concession stand, the small play area and all the wonderful smells and sights, but of all the movies I watched there, two and only two stuck with me all this time -- Star Wars and Tron.

So when the Classic Tron and Tron: Legacy showed up on my desk, I was thrown -- whiplash included -- back to the early 80s once again. For me there's nothing better than watching a movie at a drive-in, but that's a topic for another time. Let's stay on point.

I remember being amazed at the light cycles back then and after popping the Blu-ray versions in my player, I'm still amazed. Sure the effects in the original film are dated as heck, but to look at what they accomplished way back in 1982 is nothing short of astonishing. Plus, I was worried if the new flick would mesh well with the original or aim completely for a new audience and when I saw Steve Lisberger was involved with "Legacy", I knew we were in good hands.

Kevin Flynn (Jeff Bridges) is a young software engineer whiz kid on a quest. After Ed Dillinger (David Warner) steals his codes for wildly successful video games, he quickly rises the ladder to VP of software giant Encom and Flynn is out.

Flynn runs Flynn Arcade now and is intent on hacking the Encom system, find evidence of his stolen work and take down the Master Control program. But as he attempts to hack in from within the company with help from co-workers Alan Bradley (Bruce Boxleitner) and Lora Baines (Cindy Morgan), Flynn is zapped into the same program he's trying to take down.

Once inside, Flynn meets Bradley's digital alter ego Tron (Boxleitner) and after escaping during an exciting light cycle sequence, they, along with Yori (Morgan), must fight Sark (Warner) as they make their way to take down the MCP.

In the end, the day is saved, Flynn is sent back to the real world and has the proof he needs to unseat Dillinger and take over as CEO of Encom. The movie ends with the trio of friends descending the stairs from the roof of the Encom building after Flynn swoops in on a helicopter.

I truly believe "Tron" is one of those rare movies that so far before it's time, people are just now beginning to appreciate it. What was fairy tale at the time is now our reality and if you look closely at the dangers that are in "Tron" they are pitfalls that could affect us in today's world.

There are a ton of nice little goodies with the Blu-ray release, but I would highly recommend queuing up the movie and watching with the audio commentary that features Lisberger.

Final Cut: The effects are dated, but "Tron" is a movie that has stood the test of time and still delights. It's a revolutionary film that's as powerful today as it was back in 1982.

Kevin Flynn (Jeff Bridges) has gone missing -- missing for 20 years. The night Flynn went missing he told his son Sam (Owen Best) that he was off to work and promised to show him "The Grid" very soon.

Flash forward 20 years. Sam (Garrett Hedlund) is the majority shareholder of Encom and spends his time playing jokes on the company as it's focus has turned from his father's vision into something more corporate.

After being arrested following one of the pranks, Sam is visited by his father's old friend and colleague Alan Bradley (Bruce Boxleitner) and is told that Bradley was paged from his father's old arcade -- an arcade that's been dormant for 20 years.

Sam investigates and finds an elaborate computer system in a hidden lab in the arcade hidden fittingly behind a retro Tron game. As he pokes around on his father's computer, Sam is transported to the Grid and is quickly captured and taken to the gaming arena after being fitting with some updated gear.

Sam wins a few duels, but when he begins to bleed during his battle with Rinzler (Anis Cheurfa), Rinzler takes him before Clu, a digital version of his father, who rules over the grid. After a confusing few moments, it's time for the light cycle race. Dum, dum duuuuuuum.

As Sam's team is picked off one by one, Clu is about ready to end Sam when Quorra (Olivia Wilde) swoops in and rescues him. He's taken off-grid where he is reunited with his father.

Flynn brings Sam up to speed on how he had entered the Grid nightly and with Clu and Tron had sought to build the perfect system. But Clu began to take more and more control and even started feeding off the power of Flynn when he would resist and fight, so now he is a Buddhist-type recluse who sits and watches as his creation morphs into something he didn't intend.

Realizing what Sam has decided to do, Flynn goes back on the Grid to find his son and help him make it to the portal and escape himself. Along the way, they are betrayed and Flynn loses his ID disc, essentially giving all power to Clu, but Sam retrieves the disc and they find the portal.

In the end, Flynn absorbs Clu to ensure Sam makes it back and is able to set the system straight. The movie ends with Sam and Quorra, who returned to the real world with Sam, riding on his motorcycle, the fate of Kevin Flynn unknown.

This movie is what is good about popcorn entertainment. It's fast, it gives multiple nods to the original, but most importantly it delivers a nice, emotional story. Other critics have cited the lack of such a storyline as a fault, but I think they got too caught up in the flashy effects.

Clu is the creepiest of all the Grid's inhabitants. A digitally younger version of Bridges, the character looks so real at times it's astonishing. It's nice to see two Bridges in one scene at the same time.

I wasn't too familiar with Hedlund's work, but I was impressed with his performance as the younger Flynn. And then there's Wilde. She gives a nice turn as the program Quorra and is clearly the hottest thing on the Grid. I look for some nice things from Hedlund and Wilde in the future.

The extra goodies on the Blu-ray version of "Tron: Legacy" are plentiful, but you have to watch "The Next Day: Flynn Lives". Referred to as the teaser trailer for a "Tron" 3, it will have you ready to watch the film all over again.

Final Cut: A worthy sequel to the original film, "Tron: Legacy" is a fun-filled flurry that will leave you breathless and wanting to enter the Grid time and time again.