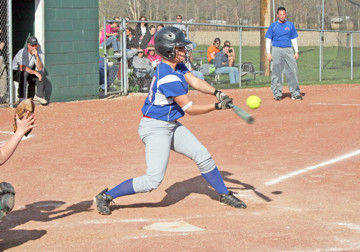 CLOVERDALE -- It was a tale of two teams Wednesday for Cloverdale as it hosted South Putnam. After gaining only one hit in the first four innings, CHS rattled off 12 hits in the final three innings and posted it's first runs of the season. However, South Putnam proved how tough they will be this season and stayed in front of the Clovers, winning the contest 11-6

It was a struggle for the Clovers early and often. When they did hit the ball it was either foul or directly to an Eagle, but in the sixth inning that all changed. Down 6-0 at the time, it took some simple words from their head coach to get the Clovers headed in the right direction.

"It's a confidence booster because it's been three games before this that we've had no runs up on the board," CHS head coach Kim Bailey said. "The girls are coming up, I don't know what wrong with them -- they're scared -- am I going to hit, am I not going to hit. Some of them are doing their job and their fine, but 75 percent of them are getting up there and I don't know what's wrong with them.

"We just simply looked at them and said 'Swing the bat and put the bat on the ball. That's all it is. Stop worrying, stop thinking -- just swing the bat and see what happens'. Those two innings, that's what happened. They just started hitting the ball," she added.

Following five innings with nothing to show for it, Cloverdale put the bat on the ball and in turn posted a four run inning to cut the Eagles' lead to 6-4 entering the final stanza. Big hits from Bradanne Toney, Heather Goss and a two-RBI smack from Andrianna Patterson had the Clovers in business.

After the four-run outburst from the Clovers, South Putnam regrouped and went to work, and unfortunately for Cloverdale, it was business as usual.

The Eagles went on the offensive and scored five runs in the top of the seventh to put the game out of reach. Thompson got things going with a double, as did Mattie Varvel in the inning. The Eagles capped a big inning with a two-run single by Janet Crafton.

South Putnam head coach Chris Jones knows it's not going to be an easy road back to last year's glory and he was glad to see the resilience from his team.

"All good team throughout our conference are going to answer," Jones said. "They're going to make runs at us and maybe score some runs from time to time and it's how you come back that next inning and whether you answer and put some runs up to answer what they did. We did that today.

"They scored four runs in the sixth and we came back in the seventh an answered with five more. I thought that was very good and very resilient of our team to not let be like 'Oh, they scored some run' and be down, we picked ourselves back up and went on the offensive attack," he added.

In the bottom of the final inning, the Clovers simple shrugged off the onslaught and showed they had more than enough fight to keep things interesting.

A walk by Paige Gutierrez and a single by Shanna Schmutte got things going. Toney came to the plate and laced a two-run triple down the left field line, but it was all the fire the Clovers could muster.

Although they suffered the loss, Bailey thought the last two games were very beneficial for her Clovers.

"I think the last two games against South Put have been pretty good as far as confidence, but our girls, at the beginning of the games, we're not going to play everybody like South Put and they've got to come out stronger and make key plays when they need key plays," Bailey said.

"When you play a team like South Put, in order to beat them you have to have no errors. That's the only way. When you have errors, they're going to beat you," she added.

On the opposite side of the field, Jones said his team used some of its experience from last season to be able to get the win Wednesday. And he acknowledged that while winning during the regular season is nice, it's all about the post-season.

"It's great," Jones said. "I think some experience from last year helped that because we did that some last year. I think that was to a benefit and an advantage to us. That's the first time we've had the chance to do that this year and we did and that's a big positive. We're learning a lot. It's only game two and we always have something to work on and that's good. But being resilient and hopefully we can keep that up and keep the focus up all season.

"The ultimate goal is to be better -- for the end of May," Jones said with a smile.

Cloverdale will host Owen Valley today at 4:30, while the Eagles will play in the Terre Haute South Invite Friday at 5 p.m.