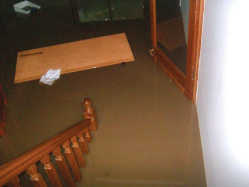 This is a picture of Alex Jacques' house from the second floor during the Queensland Flood. Jacques' home was submerged in 4 ft. of water during the flood and he has been forced to live on the second floor for months as a result. Alpha Tau Omega, Jacques' fraternity, held a campus golf fundraiser to donate money to the Australian Red Cross because of their connection to Jacques.

On Thursday, the members of Alpha Tau Omega, as well as several other participating fraternities and sororities, gathered on the East College grass and set up a grill, speakers and the rest of a small golf course for their fundraiser. Though the event was fun, the reason for having it was decidedly less so.

Alex Jacques, member of Alpha Tau Omega, had moved home to the previous year and left DePauw University, feeling homesick after being in America for two years, said Jason Edelman, sophomore and philanthropy chair. He was at home in Brisbane when the rivers flooded the majority of Queensland, including his home.

"Our house had about 4 ft. of water in it. The water levels in our suburb were 14 meters (45 ft.) above the normal levels," Jacques said. "All of the walls had the be torn down and replaced, the electric circuits for the whole house had to be replaced and Mum and Dad's newly remodeled garden was completely destroyed. We went without running water for about a week and without power for close to two."

Katie Anderson of the Thetas tees off at the first hole of the Alpha Tao Omega's golf benefit.

Though the floods began in December 2010, Jacques, his family, and the country are still grappling with the damages to homes and public property.

Jacques' household is pretty big, consisting of himself, his mom and dad, four younger sisters and his grandmother. The family has been living upstairs in two bedrooms since the floods went through the ground floor of the house.

"It has obviously been very difficult not having bedrooms, living rooms, etc. since the floods, but fortunately after a few weeks with the power back on, we are able to settle into something of a norm," Jacques said. "I know my sisters have had a really hard time coping, but we all know how lucky we are that our house didn't go completely under water.

"Apart from the obvious economic costs, it has really taken a toll on everyone having to live out of a suitcase on the floor and sleep on mattresses for the last few months. Fortunately, we are only a few weeks away from everything being entirely repaired downstairs."

Because of their unique connection to the country, Scott Mason, president of ATO, decided to hold a philanthropy project around the event, donating money to the Australian Red Cross and, with help from the Greencastle Rotary Club, the World Community Service Fund. Through a fund set up through the Rotary Club, the fraternity has been donating about $4,000 a semester.

"Because of the flood and because of an unique connection, we wanted to help out," Mason said. "We're excited to do something global."

Several different fraternities and sororities, such as Delta Upsilon, Fiji, Phi Delta Theta and more, paid $100 to enter a four-person team for the event.

Aside from simply giving to a good cause, the first place team won a $35 gift card to Buffalo Wild Wings and second place won a $20 gift card to Subway. ATO members were unable to win these prizes though, Edelman said. Those waiting for their turn to come up were also treated to hot dogs, burgers and chicken sandwiches.

"Some people really got into the spirit," Edelman said of some members who had donned stereotypical golf clothing.

The golf clubs were real, but the teams played with tennis balls, aiming for particular obstacles to hit in order to "sink a shot." The first hole of the nine-hole course, for example, was to hit a chalkboard placed in the middle of the field.

As the members played what some had affectionally dubbed "a round of galf," Jacques continues to wait for the repairs to his home to finish. He's received some support from fraternity members at DePauw, with some members even making the trip to help out, Edelman said. But there is still a lot to be done.

"In rebuilding, there is still very little we can do to keep water out. For everyone living in flood-affected areas, council regulations now prohibit any construction work that would "alter the course of flood waters," Jacques said. "It really was a once in a lifetime flood, according to research, so hopefully its something we won't have to deal with again.

"Had I been at DePauw still I would have come home right away to help with the recovery. The whole house was a mess and the yard and pool were even worse, and I couldn't have rested comfortably in America knowing what my family and friends were going through," Jacques added.