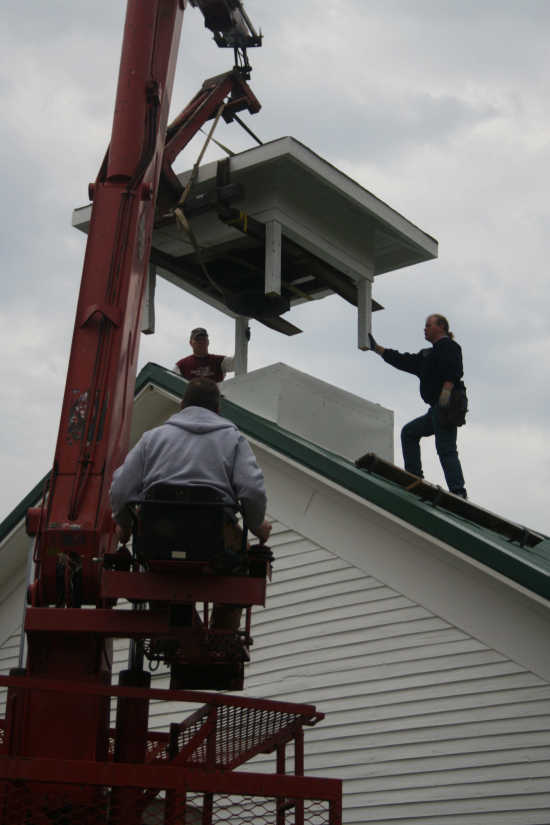 Banner Graphic/JARED JERNAGAN Andy Standeford, foreground, of Spencer Hardware booms the steeple of the Cunot Community Chapel into place Friday morning as Robert Langdon and Troy Martin of Fair & Square Construction wait to bolt it onto the roof. Mike Meyer began the work on the chapel as a way to honor his friend Jaime Speares, who died in a car accident in December 2009.

CUNOT -- A project Mike Meyer started in October has turned into something much more involved than he could have imagined.

Fortunately, he's gotten some help along the way.

Last fall, Meyer, who lives outside of Cunot, began restoring the 140-year-old Cunot Community Chapel on S. R. 243, just northwest of S. R. 42. Meyer said he originally thought the project would take a weekend or two.

"It's taken a lot longer than what I thought," Meyer said. "But it's going well."

The project began as a way for Meyer to honor his best friend Jaime Spears, who died in an automobile accident on S.R. 42 in Dec. 2009. Meyer said he and Spears had done everything together, including photographing old buildings like the old country church.

As he got more of his coworkers from Walmart Distribution involved, it became about Spears and other co-workers they had lost over the years.

"Now I'd really like to dedicate it to anyone who's lost their life on S.R. 42 over the years," Meyer said.

Robert Langdon, owner of Fair & Square Construction, read about what Meyer was doing in Spears' memory back in October and was moved by it.

"His story moved me in a way that I cannot put into words because I too lost a dear lifetime friend back on Jan. 13, 2004 (when) William Scott Bond passed away in a car wreck," Langdon said.

As a professional contractor, Langdon had skills to offer Meyer and decided to see how he could help. When he examined the building, he noted the poor shape of the roof and steeple.

"I told Mike to give me a few days and I would see what resources I could pull together," Langdon said.

Langdon's offer was a blessing to Meyer, as he did not want any of his co-workers, who have done much of the other work, doing the more dangerous roof work.

Langdon contacted Spencer Hardware and was able to get roof supplies at cost. The hardware business also donated the use of its boom truck for the removal and re-setting of the steeple.

Meyer said a cost estimate on the steeple work had been $1,400 just to get the boom unit there for a day's work.

A crew of four -- Langdon, his son Aaron and friends Troy Martin and Shawn Willhite -- volunteered their time to replace the roof, which was completed recently.

On Friday morning, Langdon and Martin were joined by Andy Standeford of Spencer Hardware to put the steeple back in its place. With the bell repaired and the steeple reinforced for strength, they lifted it with the boom before bolting it back in its proper location.

With the exterior of the church looking complete, Meyer was overcome with emotion more than once during the morning.

"I don't know what we would've done without these guys doing the steeple and roof," he said.

Anyone who wishes to support Meyer's efforts may donate to the Jaime Spears Cunot Chapel memorial Fund at Teacher's Credit Union.

With months of work behind him and more interior work to come, Meyer was thinking about the long process and an old friend.

"Jaime was just a really, really good friend. We were always doing something together," Meyer said.