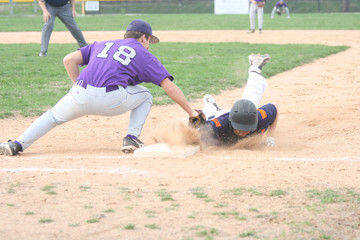 North Putnam runner Michael Herrmann gets back to first just under the tag of Greencastle's Landon Miller during Friday's contest. The Tiger Cubs rallied to beat the Cougars, 10-8.

In a game that was eerily similar to their meeting on Tuesday, Greencastle overcame an early deficit and defeated North Putnam in baseball action Friday.

Much the same as they did earlier in the week, the Tiger Cubs were able to find the big hits at the right time to overtake the Cougars late in the game. It was a game that had both teams experiencing pitching issues at times, but showed that come county tournament time, it might be the hottest ticket around.

"I give them credit, they don't give up," GHS skipper Troy Remsburg said of his team. "We might look stupid for a few innings batting, but defensive-wise we're pretty darn solid. They had some nice shots to the outfield and Tanner Parker ran one down, Ryan Battin ran one down and Hunter Mitchell almost made a great catch on the foul shot. Our errors from last year to this year are just minimal."

GHS took a 3-0 lead in the first inning, but things took a swift turn in the second for the Tiger Cubs. Following a three up and three down first inning, starting pitcher Jesse Vermillion began to experience some control issues.

The senior hurler walked Kaleb Belcher to begin the second inning and after an out by Blake Knowling, Vermilion walked the next four batters he saw and hit Kyler Badten. Then Jake Haste struck out, but the ball got away from catcher Andy Bell allowing Haste to make it to first.

Tyler Watson smacked a strong shot to the short stop for two RBIs. After the inning was over, North Putnam had taken a 5-3 advantage on no hits and things didn't look good for Greencastle.

North Putnam tacked two more run on in the top of the fourth, while Greencastle failed to score until the top of the fifth when Ryan Battin knocked in Tanner Parker on a sacrifice fly. Vermillion followed with a towering scorcher that made it to the wall, brought home Keegan Remsburg and saw Vermillion end his run at third base. He would be left stranded, but not before Greencastle pulled within two run at 7-5.

Instead of getting caught up in being down two runs, Greencastle went to the plate in the bottom of the sixth inning and exploded for five runs to take a lead they would never relinquish.

Cougar starter Tyler Watson walked Nataniel Velasquez and Hunter Mitchell to start the inning. Kyler Badten was brought in and hit Andy Bell to load the bases for GHS. Parker smacked a shot to right-center field to score Velasquez and Mitchell to knot the game at 7-all. Remsburg came up next and sent a screamer to North Putnam shortstop Michael Herrmann, who took his eyes off the ball just long enough to cause him to bobble it, allowing Remburg to reach first and bring home Bell for the 8-7 lead.

Remsburg would be brought home after Vermillion was hit by a pitch. This prompted a change in pitching for North Putnam as its sent Jake Haste to the mound. Joe Lenihan brought home Landon Miller and ran the Tiger Cubs' lead to 10-7.

North Putnam was able to add another run in the top of the seventh, but the Tiger Cubs were able to retire the side and take home their second win over the Cougars this week, winning 10-8.

North Putnam head coach Norm Fish agreed the game played out very similar to Tuesday's contest, with GHS getting the hits they needed at the right time.

"I've still got an extremely young team and we battled today," Fish said. "Greencastle, like I say, just like the other night they got big hits when they needed them and we didn't get big hits. That's the difference in the game. That game is always going to be close now -- two pretty good baseball teams. The team that comes out on top in this series like it was Tuesday will be the team that gets the timely hits.

"Obviously the last two games Greencastle, and I give them all the credit, their kids stepped up when the chips were down, with runners in scoring position their top five or six hitters come up and do the job. We're getting close, real close. We had some kids step up today and we're getting real close," he added.

Although team are most often measure by what number are in the wins and loss column, Fish said there's more to the game than just that.

"I'm not disappointed at all. Or course you always want to win, especially a rivalry. I'm a competitive coach, I like to win, but like I told the kids it's how we learn from it. We don't want it all to be about winning and losing," he said.

For Greencastle, Remsburg feels it's the experience his team has that will serve them well now and throughout this season.

"I think it's the maturity level," he said. "A lot of these boys have played together two, some of them three years together varsity and the younger guys are seeing what they're doing and now they're all doing it. So what we're down four runs, we're not going to give up. They're fighting back and staying with it.

"The head aren't hanging and that's one positive I like. They don't get down like they used to in the past. They're staying positive and staying hungry," Remsburg said.