Crash near Cloverdale on I-70 injures two 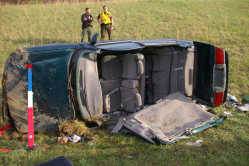 After Beverly East and Anita Tuttle were helped from their vehicle, the two women were sent to Methodist Hospital in Greencastle.

CLOVERDALE -- A car accident near the 35-mile marker on I-70 Monday morning halted traffic from both directions for an hour and led to two very serious injuries.

Beverly East, 58, and Anita Tuttle, 59, both of Illinois, were going westbound on the highway when East, the driver, fell asleep at the wheel. The car, a 2000 Buick LeSabre, drifted into the median where it stuck a culvert. The car rolled over several times before landing in the nearby ditch.

Indiana State Police arrived on the scene at 6:12 a.m., where both passengers were trapped in the car, said Sergeant Jon Chadd. Police turned the car over and helped the two women out of the wreck. Both women were taken to Methodist Hospital in Indianapolis, and are currently still being treated there after sustaining serious injuries.