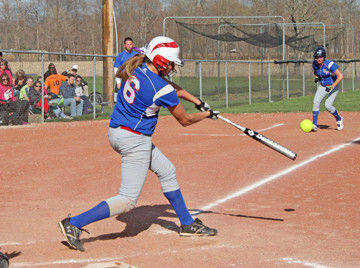 It only took a one-inning flurry for the South Putnam softball team to overtake Edgewood in Thursday's contest. The Eagles won 4-2 and moved to 8-1 on the season.

For the first two innings the Eagles' dugout was virtually silent, but once the Mustangs struck first, things changed in the bottom of the third.

"It was a good team win," South Putnam head coach Chris Jones said. "We have improved from our earlier games this year on focus as far as focusing for all seven innings. I have to give credit to our dugout as well. The girls that were in the dugout did a nice job, stayed vocal, stayed up, and stayed positive. The girls in the field did a nice job. They spread out some hits on us and we did a nice job of focusing and playing the game.

"When they got up 2-0 on us, we didn't shut down, we had good body language and we came back and answered and that's the things we've got to continue to do as the season progresses," Jones added.

Down 2-0, the Eagles shut down the Mustangs in the top of the third and used that momentum to gain all the advantage they would need. Janet Crafton got things going with a walk and was joined by Emily Dabkowski who drove a shot to centerfield. A sacrifice fly from Jenny Thompson brought home Crafton and a single from Kelsey Whitaker plated Dabkowski to tie the game at 2-all and had her sitting on first.

With Whitaker on first and the game tied, the stage was set for starting pitcher Brooke Boetjer as she strode to the plate. The junior wasted little time as she turned on the first pitch Ashley Miller sent her way and sent a laser shot racing over the centerfield fence to give South Putnam the 4-2 lead.

Later in the game Boetjer added a double to go along with her homerun. Jones noted Boetjer's performance following the game as well as the other offensive players who helped make the scoring happen.

"Brooke did a really good job. Not only did she pitch the ball well, but they fielded the ball very well -- made a nice diving catch. She hit the ball very well. That homerun was a nice solid shot out -- two RBIs I believe. Our batters did some things to move runners -- sacrifice fly, bunting people over and just did their job and played the game in order for us to get back from the early deficit," Jones said.

The South Putnam skipper like how his team was able to do its part to come away with the win.

"That's what we talk about -- accepting your role, whether it be on the field, in he dugout, pinch running -- if everyone can accept their roles, then we can be a really good team. And when people don't accept their roles, that's when people struggle. I think tonight people embraced the role they were put in and did what they needed to do and got it done," Jones commented.

After South Putnam's four-run third, the teams placed to a stalemate, giving the win to the host Eagles. Boetjer was 2-for-3 for South Putnam with a homerun, a double and two RBIs, with Thompson and Whitaker adding RBIs.

The Eagles return to the diamond tonight against North Montgomery, so there's little time to breathe and it winds down its whirlwind start to the season.

"I think it will be our tenth game in 11 days, so we are in the NBA portion of our schedule. We have North Montgomery at home tomorrow, which will be another good test for us and then we'll come back next week with four again. We keep going and that's what it's about. It's softball season and it's time to play," Jones said.