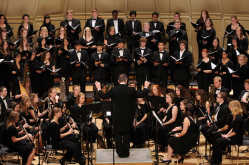 The program will include four works for symphonic band, including Light Cavalry Overture by Franz von Suppť, Make A Joyful Noise by DePauw University professor James A. Beckel, Jr., Elsa's Procession to the Cathedral by Richard Wagner, and "March" from Symphonic Metamorphosis on Themes of Carl Maria von Weber by Paul Hindemith.

The concert will conclude with Dr. Harrington conducting the combined University Chorus and University Band in Howard Hanson's Song of Democracy.

"This is the second opportunity we've had this year to collaborate with the University Chorus," states Craig Parť, University Band conductor, "and it has been a treat each time. It is also an honor to have Dr. Harrington leading this performance of Hanson's Song of Democracy".

This beautiful work, composed in 1957, was commissioned by the National Education Association and the Music Educators National Conference in commemoration of NEA's 100th anniversary and the 50th anniversary of MENC. Song of Democracy is set using two Walt Whitman poems, An Old Man's Thought of School (1874), and Thy Mother with Thy Equal Brood (1872). Hanson turned to the American poet for texts in a number of his compositions, including the Symphony No. 7 ("Sea Symphony"), Drum Taps, The Mystic Trumpeter, and Songs from Walt Whitman.

"Hanson's pairing is appropriate", writes Harry Brown, associate professor of English at DePauw University. "Both poems were read by Whitman to audiences of students and teachers, and both exhort young people to sustain the democratic ethos hallowed by the (American Civil) war and given its highest expression in Whitman's own art."

For those who cannot attend the live performance, DePauw University radio WGRE 91.5 will broadcast the concert at 4:30 p.m. on the radio and on its website at http://www.depauw.edu/univ/wgre/listen.asp.

It is requested that, if possible, those attending the performance bring one non-perishable food item for admission. All donations will go directly to the Putnam County Emergency Food Pantry. Needed items include pork and beans, dried beans and rice, chili, and canned fruits and vegetables.

For more information, contact Dr. Parť at cpare@depauw.edu, or visit the School of Music's Events Calendar at http://www.depauw.edu/music/calendar/.