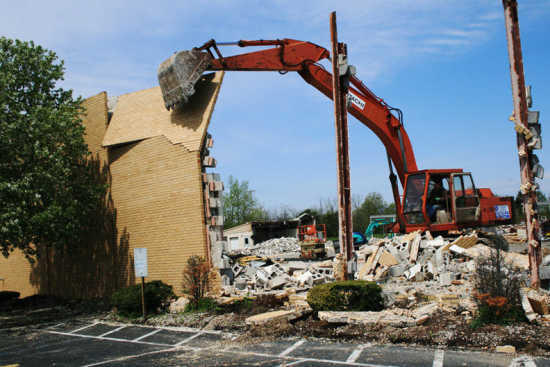 The southeast corner of the old Mallory Capacitor Co. building at 1701 Indianapolis Rd. is turned into rubble Thursday afternoon as local contractor Jerry Lewis knocks down the wall. The property is owned by John and David Zeiner and Brenda Pershing, all of Greencastle.
Order this photo

Apparently what goes up really must come down.

That point was again driven home Thursday on Greencastle's east side as the old Mallory Capacitor Co. building that once helped send astronauts to the moon was reduced to a pile of dust, rubble and recyclable materials.

Jerry Lewis of the local firm that bears his name, Jerry Lewis Construction and Excavating, has been tackling the Mallory building demolition job the past month. Until this week, Lewis had been removing the steel infrastructure, electrical boxes and electrical panels and anything else of value from the interior for reuse and recycling.

Building co-owner David Zeiner, who was also on site Thursday for the main demolition effort, explained that concrete block from the Mallory building will be crushed up for use as a base under the new building planned for the site sometime in late 2012.

The 93,000-square-foot facility at 1701 Indianapolis Rd. had been part of the Greencastle industrial landscape since 1952 (predating the IBM building which opened in 1954) and was last used by Dixie Chopper as an assembly plant.

While Mallory once used the facility to make capacitors for the historic Apollo flights to the moon, Dixie Chopper turned to more down-to-earth pursuits to assemble its zero-turn lawnmowers there from September 2005 through April 2009.

Dixie Chopper Credit (nee American Equipment Financing) was also housed in the office suites of the building before it moved to Fillmore and left the building empty in mid-2010.

It is reportedly Vishay that will be responsible for environmental clean-up at the site.

John Zeiner, who co-owns the site with son David and Brenda Pershing, said a clean-up plan has been approved by Indiana Department of Environmental Management and should commence "sometime in May." The clean-up reportedly involves removing an unspecified depth of soil because of the presence of mercury along with "volatile organic compounds," John Zeiner said.

"It's basically a technical thing," he said, adding that merely exposing the compounds to air during the demolition would eliminate most of the problem very quickly without being a health hazard.

Regardless, the previous owners will have until the summer of 2012 to undertake the remediation effort, haul the soil away to a hazardous materials landfill and continue to monitor the groundwater.

Once that process is complete, tentative plans call for a warehouse building to go up on the site, which includes access via a stoplight at Indianapolis Road and the eastern terminus of Veterans Memorial Highway.

In the meantime, another change will be apparent as the existing "high-rise" warehouse building situated north of the main plant site will be moved across the north side of the property to the far northeast corner. That could occur as early as next week, David Zeiner said.

Asked if the demolition work had uncovered anything in the process, David Zeiner smiled and nodded positively.

"Did you find Jimmy Hoffa?" someone asked jokingly, of course.

"Everything but him," he answered.