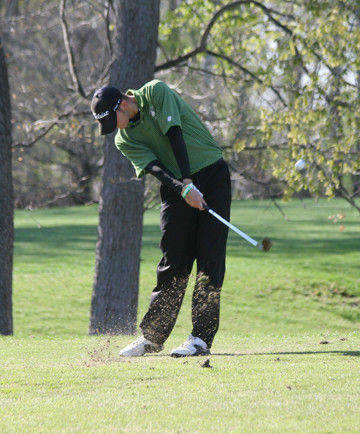 CHS senior Chris Arnold scored 36 to lead Cloverdale to a 179-214 win over Monrovia at home Thursday.
Order this photo

A deceiving blue sky and bright sun hung overhead as the golfers took to the course. The sun might have been raining down, but the temperatures remained brisk and swirling the entire round.

The Clovers might have come away with the victory, but head coach Doug Wokoun knows his team is capable of more.

"It's a win that we're going to take, but it's a very unsatisfying win because we know we're a much better golf team than what we did tonight," he said.

Cloverdale senior attacked his home course early and often and at one point was operating at two-under par. Arnold had a few struggles on the day and finished his round at even par with a 36.

Gary Williams had an up and down day and finished the round with a 45. Colte Tomlinson shot a 47 and Mike Matthews and Sam Jordan carded 51 for the round. Ryan Book chipped in a 53 in the win.

Wokoun spoke after the round and said his team needs to work on believing in their abilities more and just let good things happen.

"Chris had a great round," Wokoun said. "He played very well. Gary had a portion of his round go well. Other than that tonight's effort for us is a step backwards and we have plenty of time to get it fixed. We just have to get back to what we've been doing and find some confidence in ourselves. If we can get that done we'll be OK."

Asked how the team can make that happen, Wokoun said it was all about looking at how they got to where they are today. Basically knowing what they can do and go do it.

"I think reminding them about what they've done up to this point," Wokoun commented. "Reminding them that shots they've made they should have confidence they can make again because it hasn't been a fluk when they've done it. So just having the confidence in themselves to go up to a shot that may be challenging and say 'I've done this before. I know how to do this, I'll be OK'. And that's really where we're at right now."

Next game -- Cloverdale will host North Putnam Monday at 4:30 p.m.