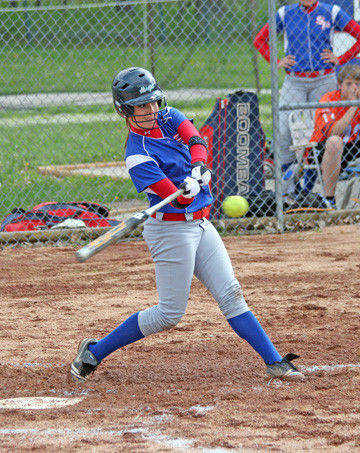 South Putnam moved to 13-1 on the season after making quick work of visiting Clay City Tuesday evening. The Eagles won 8-0 on an efficient eight-hit outing and a one-two punch inside the circle.

On a night that was a stark contrast to what spring sports fans have been accustom to, Tuesday saw sunlight gracing the diamond with a mild breeze that was a welcomed change.

"I thought we had a great team win," head coach Chris Jones said. "Everybody got in the game in some facet. Not everyone got to bat, but everyone either got to play in the field or get an at-bat in and that's nice to get at this part of the season. Especially since we haven't played in what felt like forever."

It didn't take South Putnam long to go to work. The Eagles capitalized on four Clay City errors in the first three innings and build a stout 6-0 lead.

South Putnam's big inning came in the second when they scored three runs with Janet Crafton driving in the first run with a single to centerfield. She didn't stay on base long as Emily Dabkowski knocked a triple to the right-center field fence to score her.

The next at bat had the same result. Dabkowski trotted home when Jenny Thompson skirted a triple down the left field line making the score 4-0 in favor of South Putnam.

South Putnam's next two runs came from the big bat of Destiny Tomasino. The freshman came to the plate with Jenna Jones sitting on base and crushed a shot that found its way over the left field fence plating two and giving South Putnam a 6-0 edge.

In the fourth inning it was big hits once again that provided South Putnam with its runs. After Dabkowski hit a single, starting pitcher Brooke Boetjer hit a double to score her and was brought home herself by a double from Jones. Five of South Putnam's nine hits were for extra bases.

In the field South Putnam was just as dominant. No more than four batters made it to the plate in the seven-inning affair. Boetjer pitched five innings with two hits and seven strikeouts. Kaylin Yon came in in the sixth and gave up no hits and struck out the final six batters of the game.

Dabkowski was 2-for-3 with a triple, an RBI and three runs scored to lead South Putnam.

"It's nice to get back into it," Jones confessed. "We had great performances. Brooke did a great job on the mound tonight starting off and then Kaylin did a great job closing us out with the last two innings. Defensively we were solid and offensively we just put the ball in play. Then we kind of capitalized on some mistakes they had and that's the kinds of thing we need to do to get those runs going and get momentum and shut the door on them."

With the weather being as it has, South Putnam has a string of games this week, but according to Jones that's just the way he likes it. He said it gives teams a change to tweak their performance as the tournament's draw near.

"First and foremost, we have to focus on North," he said. "They're tomorrow, so we have to finish that game we tried to start with them here and start where we left off. We have to really focus on that because it has a lot of implications with county and conference. That's our first focus and really our only focus as far as it's concerned today.

"It's good to play ball at this time of the year and hopefully it can stop raining and get some dry weather and everyone gets an opportunity to play and just get better. That's what it's all about right now at this part of the season is getting better and fine tuning some of the small thing you need to do to get better at to really play at your full potential. That's what we're trying to do," Jones said.

South Putnam will host North Putnam tonight at 5 p.m. The game will begin with South Putnam at bat with two outs in the bottom of the first inning.

Next game -- Clay City will be back in action Thursday against North Daviess on the road at 5 p.m.