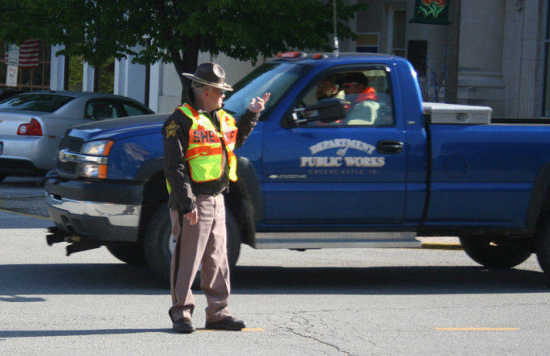 Putnam County Sheriff's Deputy Danny Wallace directs traffic during a Wednesday morning power outage at the intersection of Indiana and Washington streets. Downtown Greencastle was without power beginning shortly before 9 a.m. Duke Energy took approximately one hour to fix the problem, which area manager Steve Bahr described as an equipment failure cause by several switches failing.
Order this photo
Comments
View 6 comments
Note: The nature of the Internet makes it impractical for our staff to review every comment. Please note that those who post comments on this website may do so using a screen name, which may or may not reflect a website user's actual name. Readers should be careful not to assign comments to real people who may have names similar to screen names. Refrain from obscenity in your comments, and to keep discussions civil, don't say anything in a way your grandmother would be ashamed to read.
Respond to this story