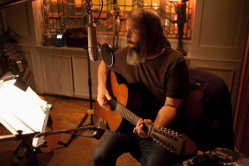 Fourteen albums into his acclaimed career, there's no doubt about Steve Earle's prowess as a musician.

Fans are getting a reminder of both facts this spring, with the April 26 release of his newest album, "I'll Never Get Out of this World Alive," and the May 12 release of his first novel on Houghton Mifflin Harcourt, which shares its name with the record.

What's there to say about Earle as a singer/songwriter at this point? We have exactly what we expect from him in this one: smart, catchy songs that paint a vivid picture.

Earle gives us just enough political stuff ("The Gulf of Mexico" and "Little Emperor") to remind us that he always has his eye on what's happening in Washington and elsewhere.

On the flipside, we get a love song like "Every Part of Me" or "Heaven or Hell," a duet with wife Allison Moorer, to balance out the political stuff and keep it from getting too preachy.

Earle is a master of challenging your mind and tugging at your heart strings.

My spin: B+ Another outstanding effort from Earle. Exactly what we expect at this point.

For those of us unfamiliar with Earle's earlier literary efforts, this novel is a revelation. It's an amazing debut.

Earle imagines the life of Doc Ebersole as he struggles with a heroin addiction and is haunted by the ghost of Hank Williams, his former patient and writer of the song that lends its name to Earle's new album and book.

Earle proves himself adept at telling longer form stories as well, weaving together a colorful cast of characters with scenes of reality and hallucination.

He does this by blending his flight of fancy with some historical accuracies, such as John Kennedy's assassination.

My spin: A- It's hard not to see some of Earle's past in his protagonist, a junkie who struggles to find redemption. This is an outstanding novel and does nothing but build on Earle's reputation as a multi-talented artist.