Accident in front of courthouse 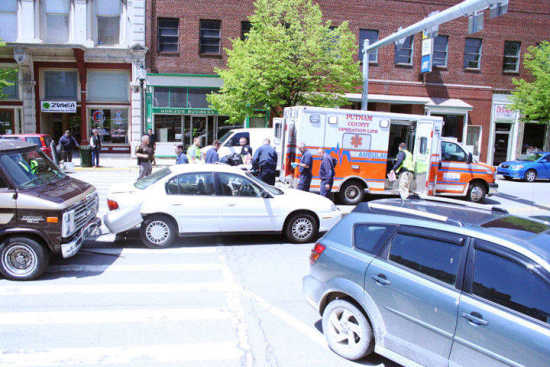 A brown 1987 Chevrolet van driven by Charles Ottinger of Cloverdale rear-ended a white 2004 Chevrolet Classic driven by Miranda Smith from Camby, who had stopped at a pedestrian crosswalk on Jackson Street in front of the courthouse in Greencastle. Ottinger's vehicle pushed Smith's vehicle into Sheila Altmeyer, who was crossing the road. Altmeyer was taken to the Putnam County Hospital with right hip and arm pain and abrasions according to Officer Ed Wilson of the Greencastle Police Department. Operation Life, the Greencastle Fire Department, the Putnam County Sheriff's Department and the Greencastle Police Department responded to the accident, which caused a traffic back-up.
Order this photo
Comments
View 9 comments
Note: The nature of the Internet makes it impractical for our staff to review every comment. Please note that those who post comments on this website may do so using a screen name, which may or may not reflect a website user's actual name. Readers should be careful not to assign comments to real people who may have names similar to screen names. Refrain from obscenity in your comments, and to keep discussions civil, don't say anything in a way your grandmother would be ashamed to read.
Respond to this story