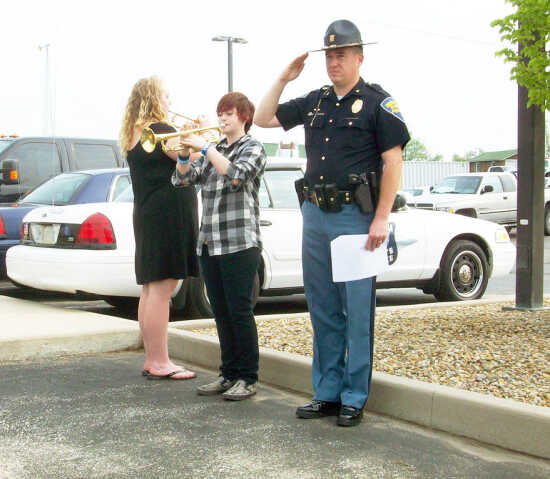 PUTNAMVILLE -- The Indiana State Police Post at Putnamville conducted its annual memorial service Tuesday to honor those members of the department who gave their lives in the line of duty.

It was the first memorial service since the merger of the former Terre Haute Post into the Putnamville Post. The merger has since formed a newer and larger district comprised of Putnam, Parke, Clay, Vermillion, Vigo and Sullivan counties.

Troopers were brought to attention and prepared for roll call by Sgt. Tom Hannon. Members of the Putnamville District Honor Guard then displayed the national and state flags as Capt. Mike Eslinger, Area V commander, and Lt. Dan Jones, commander of the Putnamville District, read each fallen member's name, along with a description of the circumstances surrounding their death.

Forty-six members of the Indiana State Police, both men and women, have died in the line duty since the department's inception in 1933.

Since the early days of the Indiana State Police, memorial services have been held each May at all ISP districts to perpetuate the memory of those who have died in the line of duty.

The service serves as a means of paying tribute to those who died in the line of duty, that their sacrifice was not made in vain, and as a reminder to those left behind to strive to maintain that level of professional service to the public.

For a complete listing of Indiana troopers killed in the line of duty and a summary of their deaths, visit the State Police website at www.in.gov/isp and click on the "In Memoriam" link on the left side of the page.