Only the beginning: Putnam County Playhouse in the '60s

BY JIM POOR For the Banner Graphic 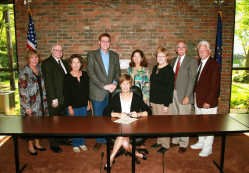 Editor's note: This is the first in a series of five articles exploring, by decade, the 50 years of Putnam County Playhouse in advance of an open house Saturday, May 28 at the Hazel Day Longden Theatre. Starting at 3 p.m., the public can tour the theater, buy tickets for "The Music Man or the season and check out a new specially produced "Putnam County Playhouse: 50 Years of Entertainment" DVD that includes programs and photos from all shows.

"Oh, come with me, where dreams are born, and time is never planned. Just think of happy things, and your heart will fly on wings, forever, in Never Never Land."

These are lyrics from a song in Peter Pan that I hope will fill your hearts as you come along with me in exploring the past years of the Putnam County Playhouse. Can we, together, "think of happy things"?

Probably not very many people remember when the Greencastle Junior High School occupied the red brick building on Spring Street, but that is where the Putnam County Playhouse was born in late 1961. Known then as the Greencastle Summer Theater, two plays were produced as the brainchild of Dr. James Elrod of the DePauw Drama Department. I was not in either play but remember them being presented in the school auditorium in the summer of 1962.

Dr. Elrod directed both "Blithe Spirit" and "Kiss and Tell." The question was: Would Greencastle embrace live summer theatre? Ray Mizer and Helen Houck starred in "Blithe Spirit" and Ray Brush, Dorothy Loudermilk and Reed Williams played roles in "Kiss and Tell." More than 600 people attended each presentation, paying an exorbitant ticket price of 75 cents! Live theater was off and running!

With the knowledge that the Greencastle community would accept and support live community theater, Elrod got some community leaders together and they decided to expand their horizons beyond just Greencastle to include all of Putnam County. They incorporated as Putnam County Playhouse (I never really knew who came up with that name) and formed a board of directors with Elrod as president. That was natural as he was the driving force for this theater adventure.

My first involvement with the Playhouse started in this incorporated year. The first play the board selected was Sabrina Fair starring Helen Houck, Romilda Hamontre and Elrod. This was my first role in a play and I had to be coaxed to auditions by my good friend Romilda. I got the part of Larrabee (an old man who made a hobby of going to funerals) and was hooked! Needless to say, I've been in many plays since.

The Playhouse presented its first musical in 1963, "Little Mary Sunshine." The cast included Romilda Hamontre as Little Mary, Bunny Bergmann as the amusingly amorous maid Nancy Twinkle, and John Franklin as the nearly blind Indian guide. This became my first singing role as the befuddled Forest Ranger, Corporal Billy. That was a really fun time. I don't know why the Playhouse has never done that show again. Maybe we've become too sophisticated to present a satire of the old Nelson Eddy and Jeanette MacDonald musicals. Most people don't even remember them. Little Mary Sunshine brought more than 800 theater-goers to the DPU Speech Hall (now torn down). We also presented "Our Town" with Ray Mizer as the stage manager. The Playhouse was "movin' on up"!

For the next three or four years we performed in Speech Hall and expanded our horizons by adding serious drama like "Inherit the Wind," large musicals like "South Pacific," and our first-ever children's musical "The Wizard of Oz" (more about it in a bit). We encouraged countywide involvement by hosting auditions in Fillmore, Cloverdale and Bainbridge, as well as Greencastle. Our ticket prices were up to $1.25 per show with season tickets for $3 for three shows (a bargain compared to 2011, right?)

People just kept coming with more than 1,100 seeing "The Sound of Music" in 1965. That show was a turning point for me. I was cast as Capt. Von Trapp with Melinda Zenor as Maria and remember well the auditions for this show. The director was from Indianapolis and held auditions all in one day. There were more than 50 children who auditioned for seven parts. The director cast all the parts the day of auditions. Kids who did not get cast were devastated. Many were crying. My heart went out to those children who wanted to be in a show but weren't cast. What to do?

That winter I proposed to the board that we present "The Wizard of Oz" with children playing all the roles. I said I would direct it (I had absolutely no experience directing). Fools rush in where angels fear to tread. The next summer (1966) saw our first children's musical presented on the Speech Hall stage. I cast every child who auditioned whether they sang well or not. We had more than 100 in the cast!

I will always be grateful to Larry Sutton for saving a befuddled director who really didn't know what to do with that many cast members. But, with Larry helping, we got the show on and it was a booming success -- 1,200 patrons saw the show! It would not be until "Mame" in 1970 that this attendance record would be broken. More children's musicals were to come!

The Playhouse Board of Directors faced a decision in 1966 (actually the end of 1965) because of a section in our bylaws that required the president to serve only three consecutive years. Dr. Elrod had been president for three years, and we had to find a replacement. The board picked me. I had only been active on the board for a short time and was unsure about following the founder of the Playhouse as president. But, board members were all of one accord, working together toward the same goals, so that the job was easier than I first thought.

I should add here that those first people on the board of directors had a vision about what we should present to the theatre-going people of Putnam County. Board members like Ernest Collins, Bessie Rector, Fred Bergmann, John Franklin and Jim Elrod knew the people of Putnam County and chose plays and musicals our audience would accept and enjoy. There are a lot of off-color, distasteful plays and musicals out there, but our board knew they would not appeal to our audience.

By 1967 we had expanded our program to five productions. Back then, we only presented shows for one week (actually the Thursday, Friday and Saturday of one week) so this allowed us to present more shows. The 1967 season included our first mystery, "Angel Street," a Victorian thriller starring Barbara Meehan and Jim Elrod. A musical revue along with Rodgers and Hammerstein's "Oklahoma!" graced our stage. This musical would be the stage debut of a very gentle man who had learned to sing in a church choir. Don South almost stopped the show each night with his interpretation of Jud Fry's bitter vindictive character.

In 1969, the Playhouse moved to the new theater in GHS McAnally Center. We had air conditioning, at last! We presented another children's musical, "Pinocchio," a couple of musical revues and the musical "Mame" with almost 1,300 attendees.

Our 10th year brought a special program that included the musical "Peter Pan" with Gail South playing the lead. The cast of 86 young people launched the 10th Playhouse season to more than 1,400 spectators! The comedy "Arsenic and Old Lace" came next and then we presented "Hello, Dolly" with Adeline Knoy as Dolly and Allan Feld as Horace in the most successful musical presented in the first 10 years of the Playhouse. There were 1,750 who attended, a record that would stand until our production of "Annie" in 1984.

We were 10 years old and going strong! Good attendance, good participation, good shows, and our bank account was in the black. Could it be even better in the next 10 years?