Playhouse is reborn in a barn

By JIM POOR For the Banner Graphic 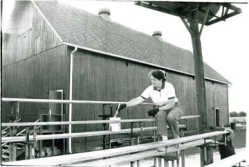 Putnam County Playhouse volunteer Sallee Bartlett repaints a section of the bleacher seats surrounding the outdoor stage as the Hazel Day Longden Barn Theatre renovation continues in its final stages prior to the opening of the 1983 season.

Editor's note: This is the third in a series of five articles exploring, by decade, the 50 years of Putnam County Playhouse in advance of an open house Saturday at the Hazel Day Longden Theatre. Starting at 3 p.m., the public can tour the theater and buy tickets for "The Music Man" or the 2011 season.

Our second season of "theater under the stars" opened with great expectations for our new barn theater.

Throughout the winter of 1981, we worked hard raising money to remodel the Longden barn, and the people of Putnam County were responding positively to what we were doing.

We did not want to start the remodeling before the necessary funds were raised. We had cleaned out a section of the barn where we housed our concession stand, but no renovation had started yet. In addition to fundraising efforts, we also had to focus on our 1982 season.

We opened the season with the comedy "Bell, Book and Candle" and also presented "Dial M for Murder" and the Rodgers and Hammerstein hit "The Sound of Music," starring Melodie Strain as Maria and Evelyn Robbins as Mother Abbess. I again received permission from Walt Disney studios to use my own stage adaptation of the Disney movie "Pinocchio." A cast of more than 40 young people were all thinking, "Hi, diddle-dee-dee, an actor's life for me!" David Brown played Pinocchio, with Dana Coffin as Jiminy Cricket and Brad Sandy as Gepetto.

Performing outside was again challenging, but our performers were enthusiastic and that attitude transferred to our audience, who for the second season, sat on those hard wooden bleachers and applauded our efforts. By now, they had accepted the outside stage, the inadequate stage lighting and the port-a-potties. We all worked hard under less-than-ideal conditions while we still appealed for funds to start renovating our barn. The weather again cooperated by only raining out one performance of "Sound of Music." It would be our only rainout in two years on the outside stage.

By the end of the1982 season, we had raised almost enough money to start the renovation. So many people donated money, labor and materials, it is difficult to remember everyone. We chose builder Ralph Hutcheson to do the renovation. He and his crew did a super job! Throughout the winter of 1982-83 the weather cooperated (they poured concrete in January!). It is my sincere belief that God worked out all these details. Many people had been praying for our success. Alan Stanley drew up the blueprint for Ralph to use and also helped with necessary permits, and other details.

A. A. Huber & Sons donated some used bathroom fixtures and one of its employees, Marvin Kelly, donated his labor to install them. Joe Weist Roofing gave us shingles at cost and installed them free. Lone Star donated the cement and Cash Concrete mixed and delivered it free. Bob and Steve Thomas donated labor and equipment to install our septic system.

Many other donations came in -- this was truly a love effort from the people in Putnam County. The Playhouse has placed a display of "boards" with names of those who contributed to this effort on the lobby wall. Next time you are in the barn, spend a few moments reading all the names of those who helped us.

By the spring of 1983, Hutcheson had completed the renovation. Initially, he said he did not think it could be done. It seemed to him an impossible task, but if I could see it, he would see it. He did, and it became a reality. We would plan a special opening of our barn theater before our 1983 season. It was a dream come true.

Indulge me now, as I remember June 4, 1983. In the afternoon, we held a deed presentation from Mrs. Longden followed by a ribbon-cutting ceremony and an open house (or should I say "open barn"). As president of PCPH, I was to receive the deed from Mrs. Longden. When it came time for me to speak, I was choked up. Vickie Parker was nervous for me, figuring I would probably cry (I didn't). I thanked Mrs. Longden and all who had helped us.

Then, Mrs. Longden said a few kind works and presented me with the deed. I remember holding up the deed and saying, "It's ours, guys!"

We then showed Mrs. Longden the plaque we would put in the lobby, telling about her gift and naming our barn the Hazel Day Longden Theatre. She was surprised and pleased. She cut the ribbon and we were open for business. I remember walking through the barn with Mrs. Longden on my arm. She seemed pleased with what we had accomplished. I was pleased, too.

That night, we sponsored a dinner to say "Thank You" to our supporters. The platforms that support the chairs were turned up along the walls and we had placed tables and folding chairs around a buffet dinner set up on the stage. Before we started, I spoke to the people gathered, still asking for money. We were about $3,000 short of our goal (that money would come in during 1983). We had borrowed stage lighting from North Putnam and Cloverdale high schools. I explained that things like stage lights were still to be purchased. Asking for money was just part of my vocabulary by then.

One last memory -- the program that night was a variety of musical numbers and stage vignettes from past performances we titled "Reflections." Several people came back to contribute their talents to this show. For me, the highlight was Gail South in her Peter Pan costume singing "Never Never Land" (yes, Vickie, I did cry then).

I look back on those two plus years and realize that together we did something special for PCPH. I was honored to be president of the Playhouse during those years. I'm sure the other board members have fond memories of that time also ... Now, on with the show!

Our first season in the barn opened with the musical "I Do! I Do!," directed by Larry Sutton. We then presented "Snoopy!," the sequel to "You're a Good Man, Charlie Brown." Following that, we did the musical "Kiss Me Kate," which earned the first barn theater standing ovation. Our first season closed with Phil Huestis giving a poignant performance in "Flowers for Algernon."

The 1984-1991 seasons brought more and more theater-goers to our new home. Besides an increase in audience numbers, there was no more red ink (the directors who loaned PCPH money were repaid), we had an expanded season, with no more high rent down the drain. Although we presented 32 shows from 1984-1991, there were some that I especially remember.

In 1984 we produced "Annie." We sold out the show and had so many people requesting tickets that we brought the cast back after our regular season closed. Directed by Vickie Parker, we had Jill Monnett as Annie, Bill Frisbie as Warbucks, Linda Williamson as Miss Hannigan and Emily Poor as Grace Farrell. One of our best!

The Tennessee Williams classic "The Glass Menagerie," with lighting effects and music underscoring unlike any other seen at the Hazel Day Longden Theatre, opened our 1985 season. This was the only play I ever directed where the cast (Marc Adams, Emily Poor, Beth Hennon and Brian Williams) had their lines learned two weeks before opening night. It resulted in very polished performances.

We also presented our first and only Gilbert and Sullivan musical, "H. M. S. Pinafore." I directed about 30 teenagers in the satire on British pompousness. In 1989, I directed another Tennessee Williams play, "A Streetcar Named Desire," starring Marc Adams and Cindy Sutton Wise. Although our audience enjoys musicals and comedies, live theater also includes serious drama, and this was a powerful play that was received well by our audience. We also had a successful revival of "Oliver!" with 1,361 attendees.

In 1990, "Show Boat" came to our stage directed by Vickie Parker. I played the part of Captain Andy with Adeline Knoy as my wife Parthy. It is one of my favorite roles and I have fond memories of playing across from my good friend, Adeline. I particularly enjoyed holding her hand as we took our curtain call bows together. This dear friend passed away in 2010, and I will miss her.

Arthur Miller's "The Crucible," another drama with excellent lighting effects and powerful performances opened the season in 1991. I was stage manager for "Fiddler on the Roof," which played to 1,410 people. Audience numbers just kept going up.

I think back to the trials of the '70s, and what a difference our Hazel Day Longden Theatre has made for PCPH and our Putnam County audience. We had come a long way in 30 years. And we were just beginning!